Welcome AJIT, a ‘Made in India’ Microprocessor 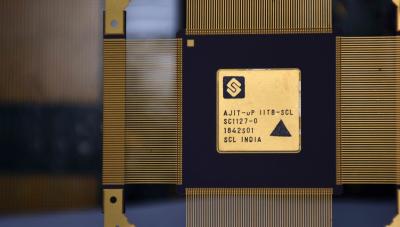 India’s electronics market is in its biggest boom ever. Fuelled by the demand for electronic devices, it is expected to reach a whopping $400 billion by 2020. Most of the electronic devices we use are imported; only a quarter of the devices are produced in the country. According to statistics, electronic goods in India account for more than 10% of total imports, second only to petroleum products! One electronic equipment that is almost always imported is the microprocessor—the ‘brain’ of an electronic device.

A microprocessor is an integrated circuit (IC) that contains a few millions of transistors (semiconductor-based electronic devices) fused on a semiconductor chip. It is just a few millimetres in dimension and is used in almost every electronic device—from the microwave and washing machine in homes to advanced supercomputers of a space station. However, developing and manufacturing a microprocessor is not easy—it is expensive, risky and needs much skill. Hence, only a handful of companies across the world have been able to manufacture and sell microprocessors successfully.

In an attempt to make a mark in the highly competitive segment of microprocessor manufacturing, engineers from the Indian Institute of Technology Bombay (IIT Bombay) have developed a new microprocessor called AJIT—the first ever microprocessor to be conceptualised, designed, developed and manufactured in India. This innovation could not only reduce the country’s imports but also make India self-reliant in electronics.

AJIT marks the first time in the country’s history where the industry, academia and the government have come together. Prof. Madhav Desai and his team of about nine researchers from IIT Bombay have designed and developed the processor entirely at the institute. The project was funded by the Ministry of Electronics and Information Technology (MeitY) and IIT Bombay. Powai Labs, a Mumbai-based company, has also invested in the venture and will own, market and support the product. “I am thankful to Dr Debashish Dutta of MeitY for championing this project and to ReapanTikoo of Powai Labs for supporting the project financially and as industry partner,” says Prof Desai acknowledging the contributions of the partner institutions.

“We have been working on this processor design for more than two years now. The design has been tested on programmable semiconductor chips before we began our effort towards fabricating the processor,” says Prof. Desai.

Akin to most microprocessors available today, AJIT comes with an arithmetic logic unit that can do basic arithmetic and logical operations like addition, subtraction and comparison, and a memory management unit that stores and retrieves data from memory. There is also a floating point unit designed to handle calculations with non-integer numbers efficiently. For those who would like to program the microprocessor, there is a hardware debugger unit to help them monitor and control the processor.

AJIT’s features can be compared to many of the microprocessors of its size available in today’s market. Unlike the ones used in the desktops like the Intel’s Xeon, AJIT is a medium-sized processor. It can be used inside a set-top box, as a control panel for automation systems, in a traffic light controller or even robotic systems. What’s more, the researchers expect that AJIT will cost as less as ₹100 when it is produceden-masse! AJIT can run one instruction per clock cycle and can operate at clock speeds between 70-120MHz, comparable to its competitors in the market.

The researchers have made the software tools associated with AJIT freely available to everyone. The processor is also available as a ‘softcore’, where vendors can buy a license to use the design of the microprocessor and fabricate it to use it in their system. The researchers also offer to customise the processor for specific applications. “The design of the processor is modular, and at some extra cost, vendors can get a processor design with a feature set suitable for the system they are designing”, says Prof. Desai.

Prof Desai and his team of students---C. Arun, M. Sharath, Neha Karanjkar, Piyush Soni, TittoAnbadan, Ashfaque Ahmed, Aswin Jith, Ch. Kalyani, Nanditha Rao---used a tool set called AHIR-V2, that can convert an algorithm to hardware and which was developed completely at IIT Bombay to design the microprocessor circuit. Prof Desai mentioned that many fruitful discussions with his colleagues in IIT Bombay, Prof V. R. Sule, Prof M. Shojaei-Baghini and Prof M. Chandorkar helped the project and he acknowledged the contribution of H. Jattana, Pooja Dhanker and Shubham of Semiconductor Labs, Chandigarh towards fabrication of the processor.

In the first stage, AJIT has been manufactured in the government-owned Semiconductor Laboratory (SCL), Chandigarh, with a technology that offers the smallest building block of the size 180 nanometers. The researchers also plan to commercially manufacture the processor using more advanced techniques that provide the smallest building block of size 65nm or 45 nm, which is the current state of the art.

“Fabricating this using 180nm technology is the first step. Although this may not be the state of the art technology, it is enough for most of the targeted applications. Using advanced technology for large manufacturing quantities—tens of lakhs—would bring the cost per piece down”, remarks Prof. Desai.

A processor made in India offers more than just the cost benefits. It provides the country with autonomy and self-reliance in the electronics sector and reduces our dependence on technology imported from other parts of the world. It also ensures a secure system with no opportunity for any backdoor entry, thus preventing digital sabotage by other countries or malicious organisations. So far, though we have had Indian teams design complete processors in India, no Indian company owns a commercially available microprocessor product. AJIT hopes to change that soon.

A home-grown processor is also likely to reduce the burden of imports. Manufacturers of electronics devices could benefit from the ready availability and competitive price of an Indian device with an added advantage of having the design and support team nearby. If an equipment manufacturer needs any modification or customisation, the design and support team would be accessible. “Geographical proximity could easily make it possible to get something done in say two weeks time, instead of three months required otherwise”, says Prof. Desai.

The challenges and the roadmap

The feat of building the indigenous microprocessor was not without challenges. Prof. Desai had only a small group very talented and passionate but inexperienced graduate students, and they worked on a shoestring budget to ensure a sound design before the processor was fabricated. “The challenge was to structure and partition the design in a way suitable to be implemented in this setup. To enable early testing, we created a computer-based model of the processor that could simulate the functionality of the processor in detail. This made testing the processor possible, much before it was fabricated,” recalls Prof. Desai.

It’s not done yet; there are tougher challenges ahead for the team to make the processor commercially viable to make this a grand success story. “For AJIT, we need to get more people to use it. Primary tests have indicated that the specifications of the processor match many in the competition and the new processor would also be cost-competitive. If the business community at large would own this processor, build systems around it so that users, as well as supporters, see value in this and can make money from the effort, then this effort can remain sustainable”, says Prof. Desai

The researchers hope that since AJIT compares well with other imported processors, it could see many early adopters. They also plan to introduce AJIT to the academia to expand its reach and provide graduating students a hands-on experience. “We could push the usage of this new microprocessor by introducing it as a part of the syllabus in engineering colleges. A well-designed single-board computer system could be made available at a low cost for students and other enthusiasts to experiment with”, suggests Prof. Desai.

On the government’s part, MeitY has extended its funding to enhance the processor and deploy it in government-initiated projects. SAMEER (Society for Applied Microwave Electronics Engineering & Research), an independent lab under MeitY, Government if India is planning to use AJIT in the receivers being developed for NAVIC or IRNNS (The Indian Regional Navigation Satellite System), an indigenous navigation system for the Indian subcontinent.

“We are hoping that people use AJIT and plan and build equipment using it. We are ready and prepared to support them. We have a seed, and we need people to grow it”, signs off Prof. Desai.