Vizzbu: An app for children with cortical visual impairment 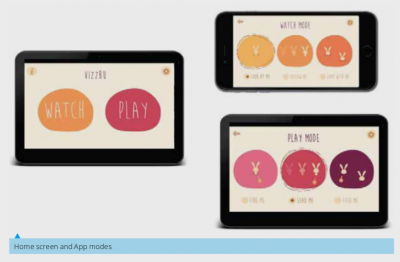 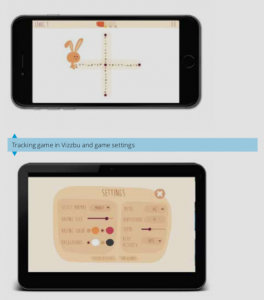 Cortical visual impairment (CVI) is defined as visual impairment due to damage to either the visual pathways or the visual centers of the brain. CVI is commonly associated with prematurity as well as insult to the developing brain at the time of birth or even thereafter. It is in fact an emerging cause of visual impairment among children in developed and developing countries. CVI is diagnosed by a unique constellation of behavioral features including strong color preferences (usually for red and yellow), difficulties with visual clutter and distance vision, and difficulties with visually guided limb movements (Roman-Lantzy, 2007).

In the current project, we are developing an app-based tool called Vizzbu (Vision Buddies) for training visuo-perceptual skills in children with CVI. We have chosen 3 foundational visual skills for training, namely, visual fixation (ability to focus/maintain gaze on a single location), visual tracking (ability to visually follow a moving target) and saccades (rapid jerky eye movements from one point of fixation to the next).

For Vizzbu, we have developed a set of incremental training activities with a gradual increase in the difficulty level. Moreover, we have 2 modes within the app: (1) ‘watch’ mode where the child can simply watch the activities without actively interacting with the app, and (2) ‘play’ mode where the child is expected to actively interact and play games that focus on training the 3 core visual skills. Since, children with CVI initially have great difficulty in performing visually-guided activities, we envision children to start off with the ‘watch’ mode and then gradually transition to the ‘play’ mode levels.

The visual design of Vizzbu is unique and has been developed keeping in mind the unique visual characteristics of children with CVI. The app’s interface is very simple, intuitive, and uses colors preferred by children with CVI. Moreover, although there are currently other apps available in the market to train different visual skills, these apps typically train solitary visual skills using a piecemeal approach. In contrast, we envision Vizzbu to be a comprehensive training tool for multiple visual skills within a single application. Although we have currently focused on 3 target visual skills, in the future, we plan to expand this initiative to train other more complex visual skills.