Understanding why vitiligo develops in human skin and finding the effective, affordable and long-lasting treatment 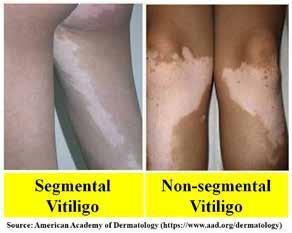 Vitiligo is a depigmentation disorder in which white patches appear on skin due to selective damage of melanin producing cells of the skin called melanocytes. Destruction of melanocytes causes hypo-pigmentation of the hair, skin and other mucosal surfaces. Depending on the geographical location within India, the prevalence of vitiligo ranges from 0.09% to 8%, with an average age of onset of symptoms at about 20 years, its occurrence appears to be equal between both genders and its rate of occurrence doesn’t vary according to skin type or race. Although vitiligo is not a life-threatening disorder but vitiligo patients experience enormous social stigmatism, rejection from the society, bullying, unwanted attention and negative comments; all of these experiences leads to tremendous stress that further aggravates the disease severity. Several findings described the association between vitiligo and other autoimmune diseases, including auto-immune thyroid diseases, Addison’s disease, halo nevi, alopecia areata.Several studies reported the roles of inflammatory cytokines secreted by CD4 + T cells, such as IFN-γ (secreted by T H 1 cells) and IL-17 (secreted by T H 17 cells) in the pathogenesis of vitiligo. In our laboratory we are trying to examine the immune-effector mechanisms of vitiligo using T-cells from peripheral blood and skin biopsies. In addition, we are examining the roles of skin resident T-cells in development and maintenance of human melanocytes at transcriptome and proteomics level. Our goal is to identify the biomarkers that causes vitiligo with an ultimate aim of developing effective, affordable and long-lasting treatment of vitiligo.