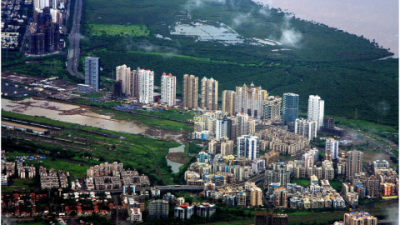 Expanding cities are causing irreversible damage to climate, water resources and biodiversity around them as they grow. More than half of the world’s population is estimated to live in cities today, and the number is projected to rise further over the next decade. As cities emerge as the major economic drivers world over, it is essential to understand how our cities grow and ensure that the growth is sustainable.

In one such effort, Dr Priya Mendiratta and Prof. Shirish Gedam from the Indian Institute of Technology Bombay, have used satellite images to study how cities change in structure and form, with a focus on Mumbai.

Urban planners need a preview of availability of new resources so as to facilitate the growth of cities, by addressing the patterns of changing land use and projecting their future growth to mitigate the negative impacts of urbanisation. Remote sensing technologies have opened new doors and have made it easier to collect data about the changes in land use with the help of satellite. Observing these changes over time is critical to get valuable insights essential for making decisions on the management of land, a sparse resource.

Developing compact cities, with efficient infrastructure and public transport systems, can help promote sustainability. “The efficient utilisation and conservation of land also need to be an area of focus, along with optimal consumption of energy, food and water, and pollution mitigation measures,” says Dr Priya Mendiratta.

As coastal cities expand, they turn into vital centres of trade due to the presence of ports. However, the limited availability of land in Mumbai, due to its typical terrain, constrains this expansion. In this study, the researchers showed how the digital interpretation of archived images and satellite data could provide a base plan to predict the growth directions in a metropolitan area. The study was published in the journal, Applied Geography.

The researchers studied the spread of built-up area, densely covered by buildings, using archived Landsat images for the four decades from 1972-2011. This data was then used to identify the direction and rate of growth of the Mumbai Metropolitan Region, which consists of Greater Mumbai, Mumbai suburban districts, and parts of Thane and Raigad districts. This region is among the most densely populated urban areas in the world. The study area also included a buffer of two kilometres from the boundary of this region to study the eco-sensitive intertidal zone.

The researchers used a technique called object-based image analysis, which groups similar pixels into objects based on its spectra, size and shape. They chose this technique over other techniques because it eliminates the typical ‘salt and pepper’ effect—pixelation of the image in black and white spots—commonly observed in conventional pixel-based image analysis. The images were first pre-processed to eliminate distortions like lines or background noise The cleaned images were then classified based on their similarity with predefined barren lands, buildings, vegetation, water bodies and wetlands. The results were finally displayed in the form of a matrix displaying the changes in land use over different points of time. The results obtained from this kind of studies may be used for modelling urban growth in an objective manner.

The hypothesis of the study was that the decline in population density of the urban areas is at the expense of cultivated lands, forests and water bodies. The study found that during the four decades, the built-up area in the region had increased by 4.5 times, from 234 sq.km to 1056 sq.km, whereas the population has grown only three-fold. Thus the urban footprint was spreading more rapidly in comparison to the population. The urban sprawl disintegrates the compactness of the city, increasing the infrastructure cost and commuting time, stressing the transport networks and destroying forests and wetlands.

In the case of Mumbai, the urban area had expanded towards Vasai Virar in the north and Bhiwandi in the east along the Central Railway line on one side and across the Thane creek to Navi Mumbai on the other side. These three growth directions connecting to the expressway leading to Pune in the southeast and Goa on the southwest encompass the Sanjay Gandhi National Park, the Matheran Eco-Sensitive Zone and the Karnala Bird Sanctuary respectively.

The researchers opine that this expansion could be influenced by the state government’s policies, which are aimed at deterring growth in the centre of the city. Instead, alternative employment centres and industrial areas were created, and vegetable and steel markets relocated. The establishment of industries has led to dense urbanisation along the Thane creek, where foothills were cut and low-lying marshy lands have been filled up. This conversion of wetland to built-up areas in many parts of Mumbai has impacted coastal ecology, the gravity of which needs to be studied.

Specific conservation strategies need to be enforced for the delicate ecology in the adjoining Sahyadri hill ranges of the Western Ghats eco-sensitive zone. The study, which demonstrates the use of digitising archived images to monitor urban growth dynamics with timely interventions, can help to protect the ecology of the region. “We can observe the growth directions in order to identify potential growth centres in the region and optimally utilise the available natural resources in the region and better conserve the fragile ecology there,” says Dr Mendiratta.

“While promoting growth in a particular direction, it is likely that decision-makers may overlook environmental conservation or utilisation of public money and/ or natural resources. However, when the growth directions over time are observed in the background of the geographical outlay of available natural resources, an algorithm can be deployed to objectively predict future growth directions for a given set of preconditions like capital investment or environmental damage. This is a typical mathematical problem with multiple variables, which under a given set of opportunities and constraints, would have a unique solution,” explains Dr Mendiratta. The algorithm could be developed further to evaluate the social and ecological impacts of these changes so as to plan our cities efficiently.

We need to be watchful of how we grow and maintain the delicate balance between development and conservation of the fragile ecology. “While metropolitan areas may be relatively few and essential for the national economy, it is the second and third-tier cities that can tip the scale, and hence the quantum of the task is enormous,” concludes Dr Mendiratta.