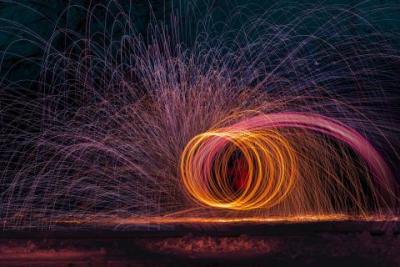 Did you know that many molecules have a ‘handedness’? That is, these molecules are distinguishable from their mirror image, like our left and right hand. But why should we care about it? It turns out that certain drugs and medicines may have their “mirror-twin” which could be toxic rather than medicinal! Through his theoretical contribution to quantum mechanics and ultrafast optics, Prof. Gopal Dixit of Indian Institute of Technology Bombay, with his collaborators in Germany, has developed a way that can help identify the handedness of substances.

Polarisation of a light wave specifies the direction of oscillations of the electric field in the electromagnetic waves. The direction of oscillation can rotate to the left or to the right, thus imparting a handedness to light. A major breakthrough in attosecond laser research in recent past is to produce pulses of circular polarization. Unfortunately there were no methods to determine the exact polarisation state or the ‘handedness’ of these attosecond pulses. Prof. Dixit and his collaborators have predicted using mathematical models that the attosecond laser pulses imparted different energies to the electrons in the molecules depending on the polarisation state (handedness) of the pulses. They devised a theoretical method to reconstruct the complete polarization state of the attosecond pulse. This for once and forever has solved the challenge of identifying circularly polarized, partially polarized, and unpolarized pulses.

Going forward the scientists expect this method to become an integral part of attosecond measurements of many processes. “Apart from molecules, our work is also important to study a whole series of novel materials. These could include superconductors, which can conduct electricity without electrical resistance, or topological materials that exhibit an exotic behaviour, the research of which earned a Nobel Prize in Physics in 2016,” remarks Prof. Dixit. Prof. Dixit and his team at IIT Bombay hope to pioneer attosecond laser research in India and make India an important player in the field.