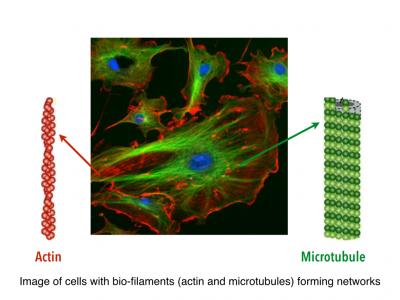 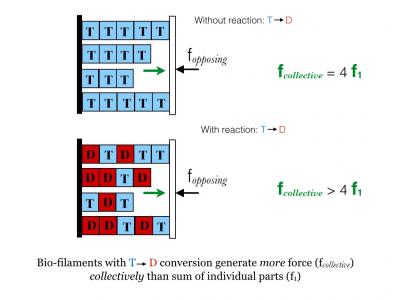 A new study in the Physics Department and the Department of Biosciences and Bioengineering of IIT Bombay finds that cellular filaments can generate more force than is possible by sum of forces exerted by each filament. The extra force indirectly arises due to ‘switching’ between two states as a result of a set of chemical reactions.

Human cells have two kinds of rigid filaments – actins and microtubules. They have considerable number of functions. They are the roadways along which cell substances are transported. They are also the structures that hold the cell in its shape and form.

When these cellular filaments stand opposed against any obstacle, they can generate force and push against the obstacle. The study by IIT Bombay researchers’ theoretically shows that the net force of many filaments opposing an obstacle can be more than the sum of forces generated by individual filaments. Of course there is no violation of the law of conservation of energy.

This collective force generation is an indirect consequence of a chemical reaction -- conversion of ATP (Adenosine Triphosphate) to ADP (Adenosine Diphosphate). Interestingly, this chemical reaction decreases the force-generation capacity of a single filament, but produces this surprising collective effect, as a result of an intriguing physical phenomena, which the authors have discovered. The extra force is to the order of 10% of sum of forces, informs one of the researchers, Dr. Dibyendu Das. The extra force generated may be small, but it can be important in the context of cell shape and movement.

How does this study contribute to human welfare? Does this study improve medical treatment? Is human life and human health likely to improve due to this study?

While this research may not directly impact human health or medical treatment, yet it is exciting as it is a novel demonstration of how bio-filaments can work together collectively, making use of some complex physical principles; it also compels every future research into bio-physics of cell force balance to take the study results into account. Since scientific understanding of human cell has a role to play in understanding root causes of disease, any study that improves our understanding of human cell will impact studies that contribute to medical treatment and human health.

It is interesting that this study is entirely theoretical and based on analysis of various models that capture chemical switching. Indeed much of the work by the researchers is entirely mathematical, which makes it rigorous and a compelling piece of fundamental research.

It is very interesting that this work that finds additional force in a group of filaments is novel with no known previous work finding similar results. This has also resulted in some resistance for the findings to be accepted.

Yet this work is seminal as it charts into a new territory. Interestingly this work is interdisciplinary with researchers of diverse back grounds -- physics and biosciences -- contributing to the study. Experimental verification of this theoretical study would require special conditions that researchers may have to simulate to obtain accurate results.

The researchers postulate that such extra force may not be limited to filaments, but may also be found in other biological systems such as molecular motors. Indeed considering that the size of filaments and motors are in nano dimensions, researchers speculate that it may be possible to develop physical nano robots that generate such extra force, collectively.