A 'spongy' liquid to clean up industrial carbon dioxide 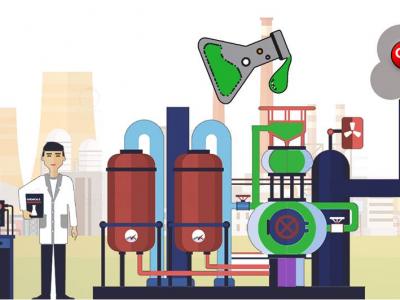 Globally, carbon dioxide emissions from human and industrial activities are rising alarmingly, and the gas is escaping into the atmosphere. Industries use physical and chemical absorption methods to capture carbon dioxide from industrial emissions. However, these methods can only capture and store carbon dioxide, which must be transported to a permanent storage site, which requires spending energy additionally.

Researchers from the Indian Institute of Technology Bombay, led by Prof Kamendra P. Sharma, have designed a porous liquid to capture/store carbon dioxide, and subsequently convert it to calcium carbonate—an industrially valuable chemical. The novelty lies in combining porosity, and catalytic activity within a liquid to convert carbon dioxide into calcium carbonate which can be removed from the porous liquid, for the latter to be reused.This porous liquid with honey-like viscosity is simple to manufacture and easy to integrate with continuous flow industrial processes. It is stable at industrial working temperatures. The study was published in the European Chemical Societies‟ Chemistry-Sustainable-Energy-Materials (ChemSusChem) Journal and was funded by Industrial Research Consultancy Centre, IITB and Science and Engineering Research Board (SERB), Department of Science and Technology (DST) Government of India.

Historically, porous solid materials have been used to trap gases from industrial effluents. Since solids cannot flow, it becomes difficult to retrofit or integrate such filters in continuous flow industrial processes. Liquids can absorb gases too, but their capacity to store gases is much less than porous solids. Besides, unlike solids, the vacant spaces in liquids are not permanent. Scientists first conceptualised liquids with permanent vacant spaces in 2007. The first porous liquids were made in 2015. Since then, scientists have used various approaches to fabricate porous liquids that can absorb gases efficiently. They used large organic molecules with „molecular cages‟ that stayed intact even when dissolved in liquids. However, the methodology used for making porous liquids in the past involves tedious organic chemistry reactions and multiple steps.

Prof Sharma‟s group showed in 2019 that a porous liquid made by simply combining hollow silica nanorods and a polymer (wetting agent) could capture carbon dioxide at room temperature. However, converting the captured carbon dioxide to a useful chemical without spending more energy would be more valuable. In the current study, the group created a liquid composite by combining the porous liquid and an enzyme called bioconjugated carbonic anhydrase(bCA) and adding calcium chloride to it.

“The proposed porous liquid can be used for all gases since the pore size of the nanorods is larger than gas molecules. By choosing the right catalyst and a suitable reactant, different gases can be converted to useful chemicals,” informs Prof Sharma.

In another set of experiments, Prof Sharma‟s team observed that the liquid nature of the polymer surfactant allowed the ions to diffuse and react, a process that cannot happen in solids. The liquid turns from acidic to neutral as carbon dioxide converts to calcium carbonate. A dye that changes colour as acidity reduces can visually indicate completion of the conversion, eliminating the need for any chemical tests or microscopic observations. The dye method provides a simple mechanism that the industry needs to check if a reaction is complete.

“The porous liquid can absorb one-fifth of carbon dioxide compared to an equal volume of a commercially available mesoporous silica, a solid. But the porous liquid can flow and hence can be retrofitted and replenished quickly to provide technological advantages,” informs Prof Sharma.

There is still work to do before one can use the porous liquid commercially in an industrial setup. Currently, the cost of the porous liquid is too high for it to be commercially viable. Since the enzyme is the costliest component, the researchers are exploring ways to find either a cheaper way to make it or an inexpensive alternative. Engineers will need to carefully design flow rates and relevant parameters to account for the slow release of carbon dioxide and its conversion into calcium carbonate.