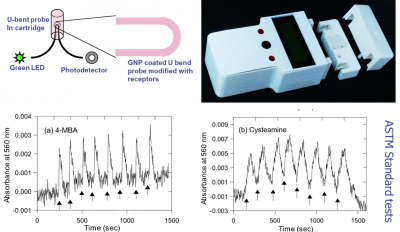 The Biosensors and Bioinstrumentation (BSBI, pronounced busybee) lab works on the development of sensors and instrumentation systems for widescale deployment. The sensors are mostly optical fiber based, although electrochemical sensors also form a part of the lab activities. These sensors and sensing platforms can be adapted to detect a wide variety of chemicals, be they biological or non-biological in origin. For example we have demonstrated detection of bacteria in water (down to 10 bacteria per ml, which translates to a volume ratio of 100 parts per trillion), proteins (down to 10-s of picomolars), TNT explosive vapor (down to parts per billion or even less).

Imagine a terrorist touching TNT and then touching the surface of the box in which it is packed. Another terrorist who has not touched the TNT, touches the surface of the box at the same spot and then touches a completely new spot, let’s say on a suitcase. A third terrorist touches the suitcase where the second person had touched it. We should be able to detect the minute trace of TNT that is transferred from the first guy to the last. In more quantitative terms it is about 25 nanograms of TNT (a little particle of about 15 micron in diameter). We have shown that we can detect such trace amounts, using a simple opto-electronic instrument which costs less than a lakh rupees And all of these being done with the same instrument, only changing the cartridges, according to the need.