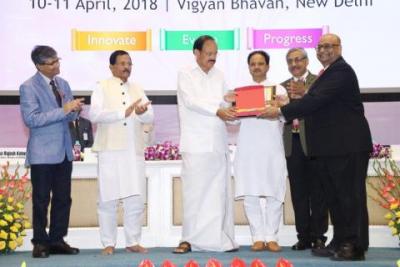 In the recently announced AYUSH awards presented by the Central Council for Research in Ayurvedic Sciences (CCRAS), an autonomous body of the Ministry of AYUSH (Ayurveda, Yoga and Naturopathy, Unani, Siddha and Homeopathy), a research group from the Indian Institute of Technology Bombay has won two top prestigious awards.

The Vice President of India, Shri Venkaiah Naidu, conferred the Lifetime Achievement award on Prof. Jayesh Bellare, a Professor in the Department of Chemical Engineering at IIT Bombay in an event organised to mark the World Homeopathy Day.  In the same event, one of Prof. Bellare’s student, Prashant Chikramane, has been awarded the AYUSH Young Scientist Award for his work on providing a scientific basis for homoeopathic medicines. Both awards consists of a certificate, a memento and a cash award.

The awards recognised their path-breaking research on the structure of homoeopathic remedies in the realm of nanotechnology and the extensive studies on the hormetic biological effects of nanoparticles. The research group, along with the two awardees, includes Prof. A K Suresh, Dr. S G Kane, Dr. Mayur Temgire, Abhirup Basu, Neha, Neelakshi, Dhrub and others.

Contributions by the award winners:

The research by this group at IIT Bombay, over the last decade, has shown that drug delivery through nanoparticles is efficient and is important in allopathy, as well as in Ayurveda and Homoeopathy. In one such research on the application of nano-biology in allopathy, Dr. Bellare and his colleagues (Kalita, Shome, Honavar and others) have used nanoparticles of carboplatin—a drug commonly used to treat ovarian cancer—to show how quickly they could reach the retina of the eyes in humans. This work could inspire new drugs to treat retinal tumours (retinoblastoma).

Extending their interest into alternative medicinal systems, the research group led by Prof. Bellare in another study has shown the nanotechnology basis for Ayurvedic bhasma and has demonstrated that nano-particulates are present in bhasma (an ash-like Ayurvedic medicine), are much more active biologically.

Curious to apply their findings in the field of Homoeopathy, Prof. Bellare's research group used electron microscopy to show the presence of nanoparticles in homoeopathic medicines—a proof that could put to rest some of the debate in this controversial field of medicine. Their findings provide a material basis for their therapeutic action, without needing recourse to any mystic energy or supernatural powers that some believe. In a series of five internationally published papers in peer-reviewed journals, they have shown that despite the apparent extreme dilution used in preparing homoeopathic medicines, there are detectable amounts of original drugs present in the form of nanoparticles. They have also demonstrated that the concentration of these drugs, though small, is measurable.

Also, Prof. Bellare’s group has been successful in demonstrating that the coating of silica used in homoeopathic medicines may provide a controlled-release mechanism—a widely exploited mechanism in new forms of drug delivery. The researchers have also studied the process of manufacture and have provided an engineering perspective on how the process generates, stabilises and retains nanoparticles. Interestingly, these nanoparticles, when fed to cell lines, have biologically stimulating effects that can be explained as a hormetic or biphasic response in which small doses stimulate whereas larges doses inhibit.

The research outputs from Prof. Bellare’s lab has created a broader impact globally and have inspired independent medical practitioners and regulators to use randomised clinical studies and other clinical research to see if the group's fundamental research can impact medical practice and the manufacture and regulation of such medicines.