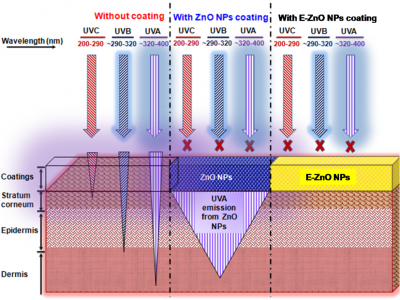 Sunscreen products work by absorbing or scattering UV radiation. Formulating superior sunscreen is of utmost importance in protecting our skin from sunburn, skin cancer and other deleterious effects. This is especially true for people with light skin due to lower concentration of melanin in their skin, which is the natural absorber and dissipater of UV radiation. The normal zinc oxide (ZnO) used as an active ingredient in sunscreen are micro-­dimensional and because of this, they scatter light and appear white when applied on the skin, which is not aesthetically pleasing. Hence, sunscreen industry is now considering ZnO nanoparticles (NPs) as an efficient UV blocker, which can reduce the scattering problem faced by its bulk counterpart,thereby making it appears transparent when applied to skin surface. However, thesetransparent ZnO nanoparticles (NPs) have UVA (~385 nm) emission, which penetrate up to the dermal layer of skin. This highly penetrating UVA emission from ZnO NPs will enhance the generation of cancer inducing radicals. Therefore, the elimination of this harmful UVA emission from ZnO NPs is much sought after for the
development of safer ZnO NPs based sunscreens.In an effort to tackle that problem, we have come up with an ingenious solution that promises to play a significant role in the science of sunscreen active ingredients. We have engineered a more potent form of ZnO, the core ingredient in most conventional sunscreens, defects in the zinc oxide nanocrystals. We have referred to it as engineered zinc oxide (E­ZnO) NPs. These E­ZnO NPs have characteristic optical transition profiles which can bypass the harmful UVA emission present in normal ZnO NPs, at the same time making it a broad band UV absorber and broad band visible emitter. This visible emission is neither harmful nor dangerous for the skin when compared to UVA emission from normal ZnO NPs. In addition to its improved safety, the broad band emission from E­ZnO NPs matches well with the in vivo human skin autofluorescence. This property of E­ZnO alsoimparts an illusion of smoothing wrinkled skin and this camouflaging effect can find its utility in wrinkle free creams. Thus E­ZnO clearly stands out as the potential and promising candidate for one of the major ingredients of sunscreen formulation not only for its protecting ability from harmful UVA emission but also for its cosmetic value.