Proteomics for translational research:Focus on brain tumors and infectious diseases 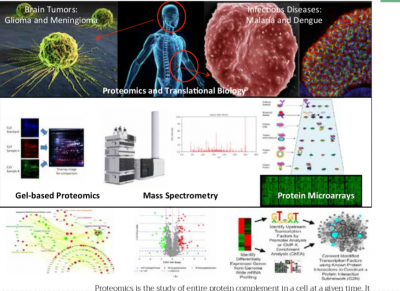 Proteomics is the study of entire protein complement in a cell at a given time. It is a rapidly growing field, and is set to become an integral part of translational research. The implementation of proteomics in clinical research can lead to novel developments in the field of personalised medicine, biomarker discovery. This also provides mechanistic insights about disease occurrence and pathogenesis. Our group at the Proteomics Laboratory in IIT Bombay focuses on clinical projects to investigate biomarkers in brain tumors (gliomas and meningiomas) and infectious diseases (malaria and dengue). In this pursuit, medical practitioners are crucial collaborators who help envision the challenges associated with a disease from a clinical perspective.Our lab is well connected
to clinical collaborators from Tata Memorial Hospital, KEM Hospital, Hinduja
Hospital, Nair hospital in Mumbai as well as many other hospitals in cities
across the country like in Bikaner, Kolkata where they study cohorts endemic
for diseases like malaria.

Early diagnosis and accurate therapy of cancer is a global challenge for researchers and continues to plague medical practitioners. Our group is actively working on auto-antibody screening of glioma and meningioma using serum and CSF samples on protein microarray platforms, which has provided putative panels of classifiers to distinguish diseased states. Ours was the first group to report such auto-antibody responses in glioma serum using human proteome arrays which harbor more than 17000 proteins (a high density chip on which glioma auto-antibody screening had never been done before). They reported proteins like IGHG1, EYA1, SNX1 and PQBP1 as few of the interesting targets for classification.

A comprehensive quantitative proteome profiling of serum samples of glioma and meningioma have been accomplished to identify the antigenic changes. They used mass spectrometry based iTRAQ as a major tool in identification, quantification and complete characterisation of proteins in such studies implying grade-wise comparison. The first group to comprehensively study and report serum proteomic alterations in meningioma patients and proteins like apolipoprotein E, A-I and hemopexin as efficient predictors for meningiomas. Tissue based protein profiling in case of meningioma has helped to identify proteins like S-100A6, aldehyde dehydrogenase mitochondrial, AHNAK, cytoskeleton - associated protein 4 and caveolin which showed sequential increase in low and high grade Meningiomas. Differential expressions of collagen alpha-1 (VI), protein S100-A9, 14 kDa phosphohistidine phosphatase, or transgelin-2 were also found to be grade-specific using this technique. They also reported several perturbed signal transduction pathways which provided insights into the pathobiology of the disease. Similar studies on glioma tissue samples are underway. Systems level studies of such cell lines have helped in identifying several putative molecular targets for therapeutic interventions.

In this light, studies on proteomics alterations of STAT3 inhibitor - LLL12 has provided insights into the proteomic alterations taking place on treatment of glioma cell lines using this small molecule inhibitor. Perspectives on fluorescent guided surgery in case of gliomas and need for biorepositories for reliable coverage of clinical heterogeneity of a disease like cancer have been published.

Further, latest developments based on targeted proteomics have been made accessible through strong collaborations with the industries that are helping in validating these findings on large cohorts. Tropical countries like India are known to be endemic to mosquito borne diseases like Malaria, which have huge morbidity associated with them. Our group is involved in proteomic analysis of serum and plasma samples from diseased and healthy individuals in infectious diseases like malaria and dengue so as to identify surrogate protein markers and understand the physiological changes, which may occur with the progression of the diseases.

Within a disease like Malaria, the species specific proteomic alterations due to vivax and falciparum malaria is being extensively studied. In a country endemic for a disease like malaria, there is a need for predicting the triggers which lead malaria to diverge into a severely fatal disease. Proteomics is being used to find markers, which can identify this trigger and differentiate between complex and regular malaria cases based on the species causing them as well as their prognosis. Our group used an exhaustive cohort with samples from different endemic regions of India such as Maharashtra, Kolkata, Rajasthan, etc. This result has revealed few proteins like superoxide dismutase, vitronectin, titin, apolipoprotein E, serum amyloid A, and haptoglobin. This study was recently published and highlighted in Nature India.