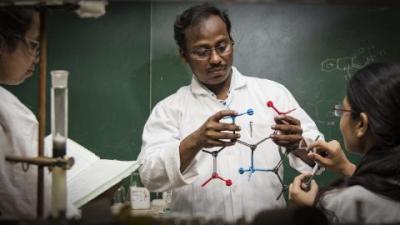 Prof. Chandra M. R. Volla, an Associate Professor in the Department of Chemistry, Indian Institute of Technology Bombay, has won the NASI Young Scientist Award 2018 for his research in the field of chemical sciences. His work deals with catalysis, the process of accelerating a chemical reaction by the use of an agent referred to as a catalyst. He shares the award with three other recipients.

The award, instituted by The National Academy of Sciences, India, acknowledges promising researchers by recognising their creativity and excellence in any branch of science and technology in India. The award carries a citation, a medal and Rs. 25,000 in cash. Since 2006, 143 researchers across India have won the prestigious honour.

Prof. Volla and his team have developed novel and highly efficient reactions that use copper as a catalyst to construct molecules for the synthesis of quinoline derivatives. Quinoline is an essential constituent in many pharmaceutical agents.  Similarly, the team developed a convenient and simple method using Rhodium (II) as a catalyst for the synthesis of benzoxazinones and oxadiazoles that find applications in the pharmaceutical industry for their antiviral and anti-inflammatory properties. These new methods play a significant role in minimising the production of hazardous wastes during chemical reactions thereby providing immense scope for green chemistry.

“Developing new methods for the synthesis of heterocyclic derivativeshas been the focus of our work”, says Prof. Volla. Heterocyclic compounds are ring structured molecules with other elements in addition to carbon and hydrogen. They are used in the fields of medicinal chemistry. “The methods are developed purely on academic interest to study the basic reactivity of the chemical model”, he adds, talking about the scope of his research.

Thanking the NASI committee for the award, Prof. Volla attributes this success to his group. “I joined IIT Bombay in October 2014, and since then, the journey has been an excellent one. The credit goes to my group. I see this as a recognition for my students more than me”, he shares.

Although Prof. Volla’s current research is mostly academic without an immediate, tangible application, he wishes to build on it in the coming years. “The basic theme of activities in our lab is catalysis. However, we intend to do application-oriented research through collaborations to address issues that haven’t been resolved for long using catalysis”, he says on the future direction of his work.

One such application-oriented research is the in the field of optimisation of chemical reactions, where it is desired to develop a method that reduces the number of steps. “Numerous steps in a reaction do not preserve a particular compound and also generate waste in each step. Thus, the resulting products have to be purified in each step, and the wastes generated amount to an environmental hazard. I want to look at how we can bypass these steps as it is beneficial to both industries and academia”, signs off Prof. Volla.