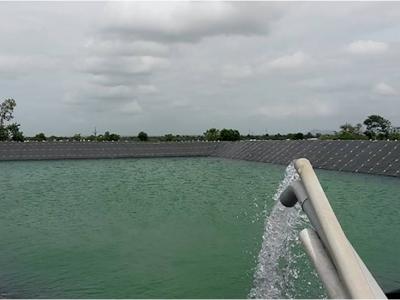 Sustainable intensification of agriculture refers to the process or system in which the agricultural yields are increased without adverse environmental impact and without converting more land area exclusively into agriculture. Proper water management is a key to the sustainable intensification of agriculture. One such measure is rainwater harvesting which promotes water use efficiency and recharges the groundwater table. The government of India has been offering subsidies to farmers for constructing farm ponds on agricultural lands under various schemes like Mission for Integrated Development of Horticulture (MIDH)), Pradhan Mantri Krishi Sinchayee Yojana (PMKSY) and Rashtriya Krishi Vikas Yojana (RKVY). A previous research review clearly shows that public and private agencies aid sustainable intensification practices mainly carried out at the farm level without having any information about their regional and social impacts on the community.

What are the impacts of these public-funded interventions that are meant to increase income and agricultural productivity at the farm level? Are they serving the purpose of efficient and equitable utilisation of the available groundwater, which is a shared resource? A team of researchers from the Indian Institute of Technology Bombay (IIT Bombay) and IHE Delft Institute for Water Education in The Netherlands are trying to find answers to those queries, considering the dimensions of water management, distribution and social impact of sustainable agricultural intensification. Their study was published in the journal Agricultural Water Management.

The field-level assessments for sustainable intensification find that the practice often helps to raise farmers’ income by improving water access on the targeted farms. However, analysing the feedback on the human-water relationship exposes the effect of enhanced risk in accessing the limited water resource within the community beyond the farm level. The current study intended to illustrate this counterintuitive effect by capturing the interrelatedness between farm-level interventions and broader community-level resource access using a case study of plastic-lined groundwater-filled (PLGF) farm ponds.

The Case Study
The researchers had chosen areas of study in the low rainfall semi-arid regions comprising shallow hard-rock aquifers. An aquifer can be defined as a body of rock or sediment that holds groundwater. Such aquifers are common in peninsular India. The study areas are Nasik, Ahmednagar, Jalna, Hingoli and Akola districts of Maharashtra, having an average annual rainfall ranging from 600 to 900 mm from June-September. In the rainfed Kharif season, farmers cultivate millets, pulses and oilseeds. Groundwater is used for irrigation in post-monsoon seasons, usually through open dug wells. From November to February, the Rabi season crops vary from drought-resistant millets, pulses and fodder grass to more water-intensive crops like onion, wheat and seasonal vegetables. Pomegranate, grapes and citrus fruits are multi-year orchard crops that have gained popularity among farmers in these regions for more than a decade due to higher productivity and farm income. Many public and private agencies also support farmers in intensifying orchard crop production by constructing plastic-lined farm ponds for irrigation.

Traditionally, farm ponds refer to unlined pits made for rainwater harvesting in many parts of the world, whose benefits have been documented widely. The plastic-lined groundwater-filled (PLGF) ponds, promoted for orchard cultivation, are a significant variation of this technology. Here, the pond serves as a storage structure for extracted groundwater and is primarily used to irrigate high-value fruit crops. It has a plastic lining of 300-500 micron High-Density Poly Ethylene (HDPE) film that prevents the stored water from further infiltrating the ground beneath. Farmers extract the groundwater from shallow dug wells that get recharged during rainy seasons and store this water in PLGF ponds to ensure irrigation in the summer months, when their wells tend to be dry. The government provides subsidies for the construction of PLGF farm ponds for orchard cultivation. It also subsidises electricity used for the agricultural purpose of irrigating field crops, so farmers do not pay for the energy cost of double pumping from wells to PLGF ponds and from PLGF ponds to orchards during summer. Besides, these open farm ponds have a surface of about 30 metres*30 metres with a depth of 3 metres. This large surface area leads to significant loss of stored groundwater through evaporation.

Widespread coverage of success stories of farmers employing PLGF methods makes other farmers aspire for them, further intensifying the creation of plastic-lined ponds. The accompanying shift of cropping pattern to high-value fruit crops that require year-round irrigation increases the groundwater extraction in an already drought-prone environment. As a result, groundwater becomes scarce to the farmers who do not have PLGF farm ponds and increases the drinking water scarcity during summer for the economically weaker section of the community who depend upon shallow public drinking water wells.

The Analysis: Method and Findings
The research team identified multiple stakeholders in the case study: state agencies, traditional crop farmers, orchard farmers, and others from the community who depend on shallow aquifers for drinking water. These stakeholders have diverse goals, and their varied decisions in social welfare, investment in technology, land-use choices, cropping choices and irrigation methods influence the usage of regionally available groundwater and, in turn, the level of agricultural intensification. Hence the team used stock and flow-based system dynamics (SD) modelling to analyse the interplay of human-water-farm level relationships and feedback mechanisms. In SD, quantities that represents accumulation over the long-term, such as aquifers, are characterised as stocks (the cumulative quantity that is measured over a period of time) and aspects of the system like rainfall and water extracted in a given year as flows (the quantity that is measured at a particular point of time) whose net accumulation characterises stocks.

The IIT Bombay team collected qualitative and quantitative data at the field level during drought and good rainfall years. They followed up through interviews with farmers and village-level agricultural assistants. The team developed a model for the region to simulate how variables like availability of groundwater, farmer’s choice of crop, intensification of PLGF farm ponds and crop yields affect one another, resulting in multiple interacting feedback loops.

They designed four scenarios for their modelling studies. In the first baseline model scenario, the researchers assumed a single or traditional double cropping and considered no farm-pond or water-intensive farming for the region. Without any water harvesting investment, the available groundwater cannot consistently support year-round irrigated crops. This is a motivation for farmers to adopt PLGF ponds.

The second scenario is the farm-level view of the PLGF farm-pond. From a farmer’s viewpoint, having even half of the stored water (the other half lost in evaporation) in the driest month provides enough economic returns to promote PLGF farm-pond-based intensification. Results show that from a farm-level viewpoint, PLGF pond-supported multi-year orchard cultivation is profitable compared to traditional cropping, which may fail without access to proper irrigation.

The third scenario simulates the dynamic human-water feedback loops to show how the investment in PLGF farm ponds and agricultural intensification of orchard crops may play out over time - growing exponentially, taking the irrigation water demand beyond the available groundwater capacity and eventually stabilising at a level where all stakeholders are worse off. The results point out that in the absence of any collective action or community control, the intensification does not remain within sustainable limits, leading to high inequity in groundwater access, a decline in agricultural productivity and loss of social well-being.

The research team emphasises the need for policy-level intervention to move away from infrastructure-driven adaptation to water scarcity, instead building flexibility in cropping patterns through creating awareness among the farmers for raising seasonal horticultural crops during good rainfall years and scaling back the cropping intensity in drought years. Cultivating orchard crops reduces the adaptive capacity of farmers by locking them into fixed year-round irrigation requirements of the crop in a highly uncertain and resource-scarce environment. Hence, the study cautions private and public agencies not to extensively promote multi-year orchards in such regions. “Our model shows that in drought years, the availability of water resources falls so significantly that even a low level of intensification may disturb the whole system and cause further inequality of resources,” says Dr Prasad.

The current study has led to follow-up work by co-author Prof. Damani and his students, who are working to develop a system to detect objects like farm ponds using satellite images. “Using their upcoming system, we can detect how many farm ponds have been constructed in a given region. Since no data is available on the number of such farm ponds to estimate their impact, such a tool is very helpful in driving policy attention. The tool can help us do trend analysis to see the multiplication of farm ponds in a region and its correlation with factors such as years of drought,” added Dr Prasad.

One of the co-authors, Prof Sohoni, is on a committee constituted by the Soil and Water Conservation Department of Maharashtra to prepare guidelines for the number of farm ponds that are ideally suited in a watershed without crossing the available groundwater threshold. “Our group has also partnered with the Maharashtra government as knowledge partners on programs such as the Project on Climate Resilient Agriculture to develop water-budget planning frameworks to guide interventions. But real impact requires sustained engagement, which we are committed to,” says Dr Prasad.