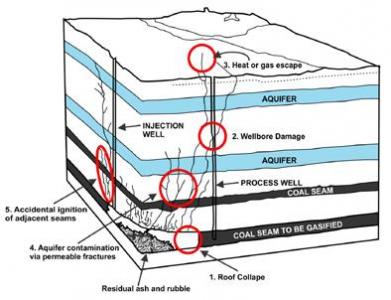 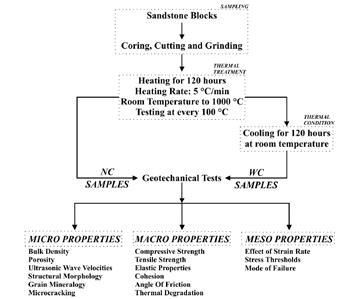 The global energy scenario is in dire need of an overhaul. The goal of meeting the future energy demands is only possible by modernising the exploration and exploitation techniques of the hydrocarbon reserves. India has an extensive reserve of coal which can serve its needs for over a century. The use of novel techniques can maximise the energy recovery from coal, and help in bridging the gap between resource and reserve. One such novel technique is underground coal gasification (UCG), which involves the conversion of coal into fuel gas (syngas) within the earth. The coal undergoespartial combustion by reacting with the mixture of air and steam, which is injected into the seam through one well. The product of the combustion, syngas, is recovered through the production well(s).For UCG to be considered as a viable alternative technique to exploit the unmineable reserves of coal, it is imperative to develop detailed understanding of the various hydrogeological, geomechanical and environmental changes that occur during a UCG operation. Due to the combustion of coal, the temperatures inside the reactor / cavity reach up to 1200°C. The result of the UCG process is a large cavity which is left behind upon the burning of the coal seam. Additionally, the rocks around the cavity get heated for a duration of several months. The continuous exposure at such high temperatures for such elongated periods of time causes the petro-physical and geomechanical properties of the strata to undergo drastic changes. Preliminary laboratory studies suggest that the microstructure and the mineralogy of the rock undergoes significant change when exposed to thermal treatment. These changes, which are a result of thermal anisotropy of various minerals, result in the generation of thermal stresses, which in turn affects the geotechnical properties. The change in geotechnical properties due to heating and the expansion of the cavity induces instability in the overlying layer, tending it to fail and fill in the cavity. This heavy movement of the overlying area results in subsidence. A schematic representation of the potential impacts of subsidence can be seen in Fig. 1. Cracks formed from the burnt coal seam to the overlying strata, may result in a leak of syngas, which can cause groundwater contamination. The magnitude of change in the geotechnical properties varies with the change in rock type, and are largely dependent on the geological conditions that exist in the strata, prior to the start of the UCG process. Additionally, the magnitude of damage to the strata and the groundwater table depends on the operational scale of the UCG process.The Government of India, through the state-owned Coal India Limited, plans to utilise the unmineable coal seams through UCG, with an aim to curb environmental emissions and cut down the country’s dependence of imported fuels and petroleum-based products. The lignite blocks in the state of Rajasthan have been chosen for the pilot-run of UCG. In the light of the aforementioned discussion, it is imperative to analyse the performance of the rocks that are present within the blocks that have been chosen for coal gasification. In this research programme, thermal modifications to the geotechnical properties have been analysed by conducting detailed and extensive laboratory studies at the Rock Science and Rock Engineering Laboratory at IIT Bombay and the Deep Earth Energy Laboratory at Monash University.
The experimental studies have been performed on a mono-mineralic, fine- grained sandstone that have been recovered from the Dholpur district of the state of Rajasthan. Since Dholpur sandstone has been extensively used as a major building material for several historic and world heritage Indian monuments, our investigation can find additional application in the analysis of fire-damaged building materials. The underlying mechanisms of thermal alteration have been established by analysing the change in mineralogy and structural morphology of the specimen. Our investigations also take into account the thermal condition of the specimen at the time of testing. During the process of UCG, the rocks near the coal burning-face would be exposed to much higher temperatures in comparison to those around the coal seam. Additionally, as the burning-face advances, it leaves behind a thermally modified cavity that is exposed to much lower temperatures. The variance in the thermal condition of the rocks, within the strata, have been considered in our investigation, and accordingly, the methodology has been defined to analyse the thermal alterations in hot and heat- treated specimen of Dholpur sandstone. Further, a change in the rate of gasification would affect the equilibrium and the stress pattern within the
strata. Therefore, the effect of strain rate on the mechanism of failure and extent of thermal damage have been studied by performing strength tests of thermally-modified specimen at three different strain rates. Changes in the microstructure caused due to microcracking have been analysed by performing high-definition μCT scans of thermally treated specimen, as seen in Fig. 2. Furthermore, the mechanism of microcracking along with the various stress thresholds have been identified by analysing the acoustic signals during the mechanical testing.