Now, Your Smartphone Can Help You Detect A Heart Attack 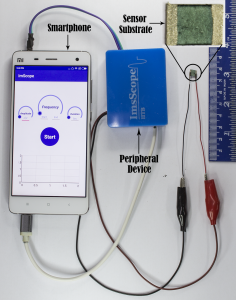 The device can detect cardiac biomarkers—chemicals released during a heart attack—using a tiny sensor, whose values can be read with a smartphone. The researchers hope that this breakthrough could potentially save many lives in our country where cardiovascular disease is one of the leading causes of death.

In India, the number of deaths from heart-related diseases has jumped from 17% to 23% in just a decade (between 2003 and 2013) and is predicted to increase in the coming years. While an early diagnosis of heart-related ailments can help, it is difficult as symptoms of chest pain are qualitative. Devices like electrocardiograms, though are promising, are not sensitive enough to measure small changes in the heartbeat. Hence, testing for biomarker proteins like myoglobin and myeloperoxidase in patient’s blood is thought to be the more reliable.

Myoglobin is an iron-containing protein released into the bloodstream soon after myocardial infarction—the sudden reduction or blockage of blood flow to the heart that leads to cardiac arrest. While a healthy person has about 25-72 ng/mL of myoglobin in blood, this level could shoot up 4-8 times (to 200 ng/ml), and sometimes as high as 100 times (to 900 ng/ml), within an hour of myocardial infarction, thus indicating a cardiac arrest.

Myeloperoxidase is an enzyme produced in our white blood cells and released when blood vessels are injured or become inflamed. It is now recognised as an indicator of an acute coronary syndrome (ACS)—a condition where there is decreased blood flow to the heart.  Higher levels of this enzyme indicate a higher risk of cardiac diseases.

The device developed by the researchers contains a filter paper sensor coated with a conducting polymer called polyaniline. Antibodies that can bind to myoglobin and myeloperoxidase are embedded on its surface. When the blood of a patient who has suffered a cardiac arrest comes in contact with the sensor, these two proteins bind to the sensor, they hinder the flow of current through the sensor, and the impedance is measured across different frequencies of the input voltage.

The best part about the device is that the sensor connects to a module in the smartphone through the audio jack (where you put in the headphones) that stores the measured impedance data on the phone. It is powered by the phone, making it portable and small enough to be carried in the pocket for use. It sends the impedance data as a function of frequency from the sensor to the smartphone in the audio range of 10Hz to 10kHz. These results are then displayed on the smartphone screen, making the device easy to use without the help of a trained technician.

“The motivation to make a smartphone-based device came from the fact that nowadays everyone owns one and it enables easy accessibility of the device to all the users. A disposable sensor would enable cost-effectiveness and ease of use as well”, says Ms. Mondal.

So how does one use this device? The device needs only the sensor cartridge to be changed after every use. A small needle-prick extracts a drop of blood (a few microliters) which is then used for testing. The device can detect the concentration of the two cardiac biomarkers within a time span of twenty minutes and can also accurately diagnose cardiac disease in an early stage. It might end the queues at the ECG machines in hospitals and increase the survival chances of cardiac arrest patients by speeding up the prognosis time, say the researchers.

“A quick measurement of the myeloperoxidase levels in a person’s blood would provide them with ample time for taking precautionary steps regarding their lifestyle, medications, etc. to prevent suffering from myocardial infarction in future. Chances of having a heart attack can be predicted almost 3 to 6 months in advance. Increased levels of myoglobin indicate the onset of a heart attack and early diagnosis would help in contacting a professional for the proper course of treatment”, explains Ms. Mondal.

Since the researchers have used inexpensive materials, the device costs about INR 5,500 at the research level. The researchers hope that when the device is produced at a commercial scale, the cost could come down to just Rs 1500, making it affordable for countries where access to medical amenities is challenging to come by and medical aid hard to reach. Also, since the sensor is biodegradable, it can also be disposed of without harming the environment.

“Owing to its low price, the device along with the sensor would be affordable by the majority of people who can use it at home and thus avoiding visits to pathology labs frequently for testing of these markers”, remarks Ms. Mondal.

So, how long would it take before you can see this device in action? “Currently, we are working towards the testing of the sensor using spiked human serum samples. We are also developing a sensor holder to be integrated with the portable device so that one single module can be used. We are planning a timeline of 6 – 12 months for initiating clinical trials”, signs off Ms. Mondal.