A New Porter for Cancer Drugs 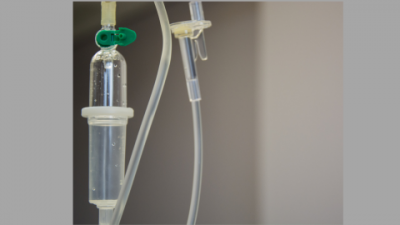 Researchers from IIT Bombay have designed a protein-based carrier for delivering drugs into cancer cells.

An effective strategy towards treating cancer is to deliver just the right dose of the anticancer drug to kill only cancerous cells and cause minimum damage to other healthy tissues. Scientists are experimenting with various techniques to achieve targeted delivery and controlled release of anticancer drugs. In a recent study, researchers at the Indian Institute of Technology Bombay (IIT Bombay) have used a protein derived from the serum of cows--- called bovine serum albumin (BSA)---in a saline solution, to make a hydrogel that acts as a drug carrier.

Hydrogels are jelly-like materials that are mostly liquid but exhibit solid-like properties. They are formed by a network of synthetic or natural polymers dispersed in water. When kept steady (that is, not subject to any mechanical disturbance or force), they retain their shape---as if it were solid---due to the multiple molecules cross-linked to create a solid-like structure. Hydrogels made with a naturally-occurring polymer, like a protein, are used in medicine as they are biocompatible and can be naturally removed from the body after use. They have a broad range of applications in drug delivery, tissue engineering, sensing, and making artificial organs.

“Significant progress has already been made in the field of cancer treatment. However, several challenges still exist, and there is a dire need to develop new systems and strategies to address these challenges. Hydrogels serve as an efficient platform in this regard”, says Prof Chebrolu Pulla Rao from IIT Bombay, who led the study.

In this study, published in the journal ACS Sustainable Chemistry & Engineering, the researchers combined BSA molecules in saline solution with the help of a cross-linking agent called epichlorohydrin. The cross-links thus formed connect different polymer chains and help build a gel-like structure. The resulting hydrogel is highly porous and can carry drugs like a capsule. The researchers also showed that one could control the size of the pores by controlling the concentration of BSA used while making the hydrogel.

Most gels become liquids when they are subject to pressure or disturbance—such as while passing through an injection needle or due to the physical stress inside the body. However, the BSA hydrogel created by the researchers retained its gel-like structure even after passing through an injection needle—a desirable quality for therapeutic use. To be able to use the hydrogel to carry drugs, the gel needs to retain its shape or integrity once it enters the patient's body. The researchers observed that the BSA gel healed itself after mechanical damage and could withstand a weight of about 300 times its own. These properties ensured its potential as a reliable carrier of drugs.

The researchers then studied the rate at which the hydrogel released the loaded anticancer drug by measuring the amount of drug released at regular intervals. They observed that the drug release continued even after 120 hours, ensuring a slow and continuous release necessary for successful chemotherapy, as burst releases are harmful. They also tested the rate of drug release at various levels of acidity and found that it was relatively slow and continuous. It was highest at an acidity level that corresponds to that of cancer cells. “The release is sensitive to acidity, which is a boon in disguise since the pH of cancer cells are also acidic”, says Prof Rao. Besides, the BSA hydrogel is biodegradable, and a digestive enzyme called trypsin, produced in the small intestines of humans can break it down.

The researchers also tested the efficiency of the hydrogels in carrying and delivering drugs by using cancer cells cultured in the laboratory. They immersed the drug-loaded hydrogels in a culture medium for 24 hours to allow the drugs to mix with the medium and then treated the cancer cells with this medium. They found that 70-80% cancer cells died, proving that the BSA hydrogel is a potential carrier for anticancer drugs. The clear gels, which did not have any medicine, were harmless and did not kill any cells.

The proposed BSA hydrogel is versatile and can carry drugs to treat other conditions besides cancer. “There can be various other potential applications of these gels, which are being explored. These can be loaded with other specific drugs for external applications such as wound healing or antimicrobial activities”, adds Prof Rao.

Are these gels ready to be used? Not yet, say the researchers. “We have just completed the basic studies to explore the properties of the gel, and now plan to go ahead for in vivo (in a living organism) studies. Only when the results of the in vivo studies are positive, its commercial importance can be thought of”, says Prof Rao. Since the gel is not patented, any researcher could use it for further studies. The findings of the study bring new hopes of cancer treatments that can effectively counter the disease with minimal side-effects.