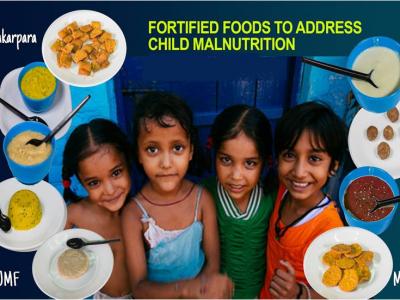 Palatable supplementary foods designed with variety in mind could be the cure for urban
malnutrition.

Malnutrition occurs when a person’s diet does not contain the required amount of vitamins and
nutrients. It is a widespread public health crisis in India, usually beginning during childhood. If
left untreated, malnutrition can lead to physical or mental disabilities, dire weight loss and even
death. A 2019 UNICEF report showed that malnutrition caused 69% of deaths of children below
the age of five in India.

The programs by the Government of India to address malnutrition are primarily suitable for
children in the rural parts of the country. These programs cannot sufficiently combat malnutrition
among the children in large populations of marginalised communities within urban areas such as
slum dwellers. NITI Aayog (the governmental agency responsible for these programs) recently
published a progress report that advised the need to revise the nutrient content and food
composition of the foods offered to children 6–36 months of age. Furthermore, the nutrition
alternatives currently provided are not very palatable and become monotonous to consume.
Hence they are not the most effective in addressing malnutrition.

In a recent study, researchers from the Indian Institute of Technology Bombay (IIT Bombay)
designed and created their own Micronutrient Fortified Foods (fortified foods) at IIT Bombay,
keeping some previously overlooked factors in mind. The study found that the efficacy of
researchers’ fortified foods in reducing malnutrition was more than that of take-home rations
currently provided by the Government. Their findings were published in the Pediatric Oncall
Journal. The research was funded by the Tata Centre for Technology and Design at IIT Bombay.
The researchers carried out the study in Dharavi, a slum located in Mumbai, India, to shed light
on urban malnutrition.

To address malnutrition, we can add missing nutrients to foods. Such foods are called
Micronutrient Fortified Supplementary Foods. An example is milk fortified with Vitamin A and
D. There are different kinds of fortified foods depending on the preparation procedure, nutrient
amount, and food type. Currently, the Government of India provides soya flour or gram flour
fortified with micronutrients such as zinc, iron and calcium and vitamins A and C. These flours
are distributed as take-home rations, which are prepared and eaten as porridge at home. The bag
of flour is shared amongst the family, and malnourished children often do not get their share of
daily nutrition requirements.

“Government agencies generally tend to take a one size fits all approach. Though easier to
implement logistically, it is not effective most of the time,” says Prof Parthasarathy, a senior
researcher in the study. Studies have shown that there could be better alternatives to fortified
flours.

Since flours as take-home rations were observed to lack taste, the researchers hand-selected a set
of food items for the fortified food product development. They identified typical diets and food
consumption of children in households in Mumbai such as Upma, Kheer and Zunka. They
designed the fortified foods as 7-in-1 packets for each child to consume. There were two reasons
for this design choice; to provide a variety of options and to ensure that each child received their
nutritional requirement.

The take-home rations consist primarily of flour with salt or sugar, and ingredients need to be
added during cooking to make them palatable. Cooking time is more for these rations, and more
ingredients need to be added, increasing the cost for the consumers. The researchers designed
fortified foods as premixes with spices, fat, and seasoning already added. Thus they cut down the
consumer’s added costs and the cooking time. These fortified foods had a preparation time of 5
minutes, while the take-home rations took 20 minutes.

The researchers conducted the study in 300 Anganwadis or government-sponsored child care
centres across Dharavi. They screened children between the age group of 6-60 months for
malnutrition by WHO growth charts. The selected children were divided into two groups; one
group received the fortified foods that the researchers designed, while the other received take-
home rations for three months. To ensure uniformity, the researchers counselled the Anganwadi
workers about the benefits of supplementary foods and instructions on using them.

Furthermore, researchers also took into account the calorie and protein requirements of different
age groups. The children in the fortified foods group were divided into two subgroups, i.e. 6-24
and 25-60 months of age. The researchers provided semisolid fortified foods to children younger
than two years, such as Upma premix, Kheer premix and Ready to use Multi-Grain Flour Paste.
These delivered 250-300 kcal and 10-12 g proteins daily. The older children were given a
combination of semisolid foods and finger foods, all developed to mimic traditional
Maharashtrian dishes such as Nankhatai, Shakarpura and Zunka premix. These could provide
450-500 kcal and 12-15g proteins per day. In contrast, the take-home rations provide a single
take-home ration packet for all age groups.

At the end of the 3-month study, the researchers screened the children once again. The number of
children with malnutrition had reduced by 39.2% in the group using researchers’ fortified food
and by 33% in the group using take-home rations. The researchers’ fortified food also had
greater acceptability than take-home rations due to the variety in the supplementation and taste
specific to the age categories. Thus, the researchers observed a correspondingly higher
consumption (75-80%) in the fortified food group. However, it is essential to note that the
consistent monitoring of both groups’ consumption by Anganwadi workers could have
contributed to the decrease in malnutrition. Their counselling ensured that the children consumed
the take-home rations.

“The fact that malnutrition has not substantially reduced in Maharashtra can be a basis for
developing alternatives for the take-home rations. It can be a basis to look for other follow-up
mechanisms to bring down malnutrition,” says Prof Shah.

The researchers wish to bring real change to how the Government combats malnutrition and are
working on ways to make their fortified foods a viable alternative for the Government to
implement. This study was a pilot project to evaluate the technical efficacy of fortified foods for
malnourished children. As a next step, they plan to consider the cost of production and the effort
to cost ratio. They are in talks with the Integrated Child Development Services commissioner of
the Maharashtra Government and the Tata Trust’s nutrition team.
“We have urged that the government programme integrates MFFs into the system and brings in
the 7-in-1 packets approach in place of the current single THR formulation,” says Prof Shah.