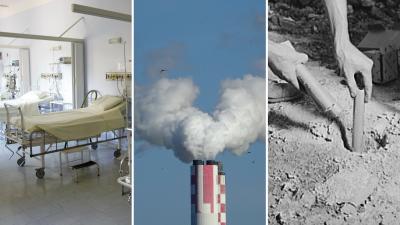 Cancer, a condition where certain cells in our body grow without a check, could turn fatal if not detected in its early stages. Certain cues cancerous cells give out can help early detection of cancer; for example, certain chemicals exhaled through our breath are indicative of lung cancer. However, conventional breath tests to detect cancer cannot be conducted at the patient bedside, are cumbersome, time-consuming and provide a reliable result only when the chemicals to be detected are present in large quantities. In a recent study, Prof. Chandramouli Subramaniam and his team from the Indian Institute of Technology Bombay have developed a system that can help in the detection of such chemicals in single molecular levels, in about a minute. Interestingly, the same platform can also be used to monitor air-pollution levels or detect explosives like TNT (trinitrotoluene).

There are two types of techniques to detect a chemical substance (an analyte): indirect and direct. In the most commonly used indirect method other molecules, called `labels’ specifically bind to the analyte and emit a fluorescent light which is detected. In the direct method, the light scattered by the analyte itself has a specific signature that is detected. The indirect method has certain disadvantages that the detecting system has to have as many number of specific labels as the type of analytes. It also requires larger concentration of the analytes. “A label-free approach has several advantages such as minimal sampling time, more certainty and accuracy of detection,” explains Prof. Subramaniam.

The study from IIT Bombay, published in the journal ACS Sustainable Chemistry & Engineering and funded by the Department of Science and Technology’s Nano-mission program, uses a direct (label-free) technique called Raman spectroscopy to detect specific substances. However, the intensity of the light collected in Raman scattering is inherently very low. To overcome this, scientists worldwide have developed a method called Surface Enhanced Raman Scattering (SERS) whereby light scattered by a molecule located in close vicinity to a metal nanoparticle surface can exhibit highly enhanced intensity and thus can be detected. Though this gives a highly sensitive signal, specific to the analyte, getting a reliable signal has been a problem as the nanoparticles are highly mobile due to Brownian motion of these colloids. It is here that the scientists at IIT Bombay have come up with a novel idea of making a “cage” of nanoparticles to trap the analytes.

The researchers used a method called thermodiffusion, or Soret effect at a nanometer level to create nanoparticle assemblies (like lumps of marbles stuck together) , into which they observe the analytes get trapped and gives a light signal that is about a million million times higher. By cooling one side of their system to -10°C, while keeping the other side at room the temperature the nanoparticles (of silver and gold) migrate to one side and stick to each other to form the “cages”. They observed that the scattered light from the analyte trapped in this assembly was distinct and intense, making their detection quick and accurate, even if only a single molecule of the analyte was present.

The newly designed platform can detect substances in any form—gaseous, liquid or solid. Liquids or gases are identified by mixing them with the Soret colloid and then carrying out Raman spectroscopy. In the case of solids, gas is passed over the analyte to transport its molecules to the Soret colloid. This process is similar to the air-curtain at airports for screening presence of dangerous chemicals. It utilizes the concept that any solid substance will always have a layer of molecules in vapor phase at its surface. This process helped the platform 'sniff' substances like TNT in its solid form—a significant feat considering solids need to be otherwise dissolved to form solutions or be heated to high temperature to be detected. The platform successfully identified TNT in the presence of similar, non-explosive but chemically similar substances like DNT (dinitrotoluene) and nitrobenzene.

How is this technique promising for the future? The platform can be used to make portable spectrometers. “We are in discussion with an Indian company to develop a handheld Raman spectrometer. We can then couple it with our SERS platform to form a diagnostic device, enabling us to provide early warning signs for lung disorders. A security screening device could also be potentially built”, says Dr. Subramaniam.