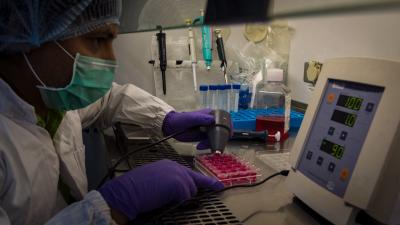 Even though the first medical description of cancer was written in Egypt around 1600 BC, scientists all over the world are still looking at a comprehensive treatment to treat this often-fatal disease. One major challenge is that drugs used in  chemotherapy affects healthy cells too as they do not selectively attack cancer cells, and many of them fail to penetrate into all the cells of a tumour. In a recent study, researchers from the Indian Institute of Technology Bombay (IIT Bombay) have proposed a new method of combination therapy where they can target solid tumours using an ultrasound image guide, deliver the drug deeply, and enhance killing of tumour cells using a naturally occurring lipid, all at the same time.

Cancer is a complex disease, with variations across individuals. Often, one solution to treat cancer does not fit all. A combination therapy involves using multiple complementary approaches to address a disease condition.  This provides a better chance to tackle the disease across the population. The researchers of the current study, led by Prof. Rinti Banerjee from the Department of Biosciences and Bioengineering, IIT Bombay, have proposed one such combination therapy. Simply put, this combination looks like two balls---a small and a big---stuck together. The smaller ball is the capsule that contains the drug and the bigger one, double the size, is a gas bubble. The bubble is about 500 nanometers, and is known as a “nanobubble” and the drug carrier is called “nanocapsule”. Each of these components act synergistically in treating cancer.

The nanobubble has two purposes. It can be detected by ultrasound imagery. This has a potential for image guided cancer therapy, where it is possible to track its location as it traverses through the blood streams. The second purpose is to enhance the delivery of the drug carried in the capsule. When ultrasound is applied near the tumor cells, these nanobubbles expand and contract, and eventually burst. This helps in loosening  up the tumor tissue. The capsules can then easily penetrate the tumor and deliver the drug deep inside.  The nanobubble, in a sense, clears the way, sacrificing itself, for the nanocapsule.

The capsule also has two ways of controlling cancer.  The capsule shell is made of lipids, a naturally occurring essential biomolecule in cell membranes.  The capsules called liposomes, and by nature they are biocompatible. These capsules have to be very small (about 200 nanometers) so that they can penetrate through the gaps between the cells. The anti-cancer drug is embedded inside the capsule. Prof. Banerjee’s group have used Paclitaxel, a commonly used chemotherapeutic drug for a wide range of cancers. In addition, they have also used a naturally occuring lipid (phosphatidylserine) which is responsible for cell death.

While each of the above principles and methods have been known to exist independently, the key innovation of Prof. Banerjee’s group is to combine these together and provide a generic platform that can be applied to various other therapeutics. “To the best of our knowledge this is the first time a smart combination therapy with a pro-apoptic biomolecule, a drug, and nanobubbles have been used together”, says Prof. Banerjee. The research has been recently published in the journal Scientific Reports.

The group has carried out experiments with this new therapy in lab grown cells (in-vitro), as well as in animals (in-vivo) to test the anti-tumor efficacy. The results showed that the combination therapy with ultrasound was more effective than any other subcombination with one or more components left out. The drug was taken up quickly by the cancer cells, caused higher amounts of drug accumulation in the tumor and had higher effectiveness in killing the cancer cells or regressing the tumor.  The animals were also found to have 100% survival rate in the combination, than otherwise. Even the ultrasound images around the tumor tissue were obtained with a  significantly better contrast compared to the existing methods (SonoVue).

Talking about how this combination can help fight cancer, Prof Banerjee explains, "This research presents an image-guided, ultrasound trigger-responsive platform for improved tumour cell targeting along with real-time monitoring of the disease.” This innovation holds  potential as an adjunct anti-cancer therapy and paves the way for progress in ultrasound image-guided and triggered cancer therapeutics. The overall increase in efficacy and the better visualisation provided by the nanobubbles could help further customise the treatment.