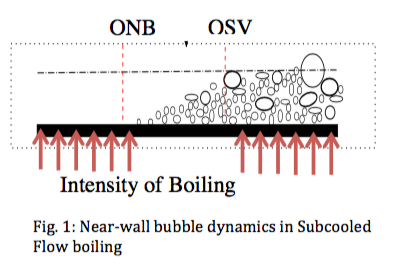 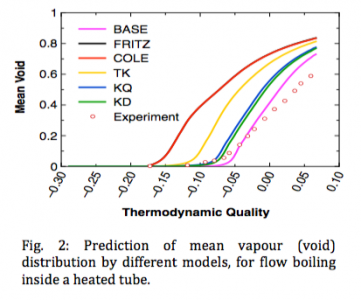 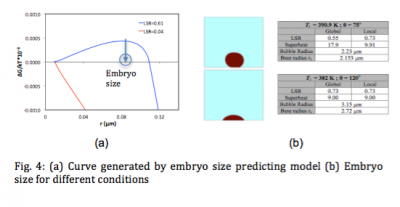 Subcooled flow boiling enables high heat extraction, an immensely beneficial feature in a number of industrial systems. Herein, subcooled liquid enters the tube, and boiling commences at the wall, at a location where the temperature of the liquid adjacent to the wall exceeds the saturation temperature. This location is known as Onset of Nucleate Boiling (ONB). At a downstream location, the bubbles forming at the wall become more in number and start to depart from the wall, which is popularly known as the Onset of Significant Void (OSV) (Fig. 1). Since the bubble dynamics near the wall greatly influences the heat transfer capability of the system, a detailed study of this phenomenon assumes significance.

The present work focuses on using computational modeling techniques to study subcooled flow boiling phenomena at high pressures. For modeling this phenomenon, the ‘wall heat flux partitioning’ (WHFP) model, in conjunction with the Eulerian–Eulerian Multiphase Flow (EEMF) formulation is used. An extensive assessment of various constituent models within the coupled EEMF- WHFP framework (Fig. 2) revealed that, the ‘bubble growth rate’ and the ‘initial nucleating size of the bubble’ need to be accurately modeled in order to achieve better predictions at high-pressure conditions.

In order to develop an accurate bubble growth model, DNS simulations were performed with a view to study the microscale physics of the phenomenon (Fig. 3a).The understanding thus gained from the DNS simulations was used to develop a macro-scale ‘wall-bubble growth’ model (for water). This model generates good predictions for an extensive range of conditions: for pressures of 1-180 bar, in pool as well as flow boiling conditions, in low as well as high subcooling, under both horizontal and vertical test section orientation (Fig. 3b).

A model for the ‘initial nucleating size of bubble’ (or) ‘embryo size’ has also been developed and tested, for a wide range of conditions (Fig.4).

Both the ‘Bubble Growth model’ and the ‘Embryo size model’ are formulated in such a form that they are implementable within the EEMF-WHFP framework and will help in predicting high pressure sub-cooled flow boiling more accurately. This will in turn enable more safe and efficient designs of industrial heat exchangers to be developed.