Monitoring Antibiotics in Dairy and Meat Made Easy 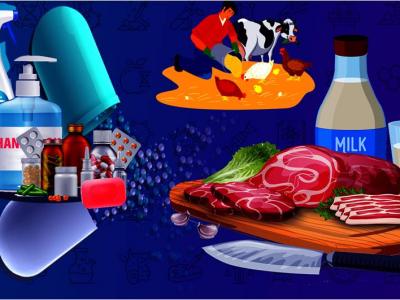 Researchers from IIT Bombay have developed a simple and novel sensor to find out the level
of antibiotics present in food and water.

Antibiotics are very effective in killing bacteria, only as long as the bacteria do not become
resistant to the medicine. Antibiotics are widely used to treat bacterial infections in humans
and animals. They are even used in household items such as floor cleaners and soaps.
Antibiotics enter the environment from these sources and contaminate our food and water,
giving a chance to the bacteria to become resistant to the medicines, which could earlier kill
them. It means that the drugs we could use to treat a particular disease may no longer be
effective.

We need to monitor the level of antibiotics in our milk and meat or the water around us to
ensure that it is minimal. A group of scientists, led by Prof. Soumyo Mukherji, in the Indian
Institute of Technology Bombay (IIT Bombay) and Manipal Institute of Technology,
Manipal, have developed a sensor to find out whether a sample contains certain kinds of
antibiotics, identified as β-lactam antibiotics. They published a study about this in the journal
Analytical Chemistry.

There are different methods to check if a sample contains an antibiotic, but they cannot
determine the level of the said antibiotic. Other methods such as Mass Spectroscopy or
standardized chromatography can measure the levels of antibiotics but are expensive and
require experts to handle them. In contrast, the sensor developed by Prof Mukherji and team
is easy to use, affordable, robust and reliable. It can be used to check the presence of β-lactam
antibiotics in a wide variety of samples, including water, milk and meat and does not require
an expert to use it.

Penicillin and similar antibiotics like cephalosporin are called β-lactam antibiotics. They
derive their name from the presence of a ring containing nitrogen in their molecular structure.
The antibiotics can kill a wide variety of microorganisms, making them a popular drug of
choice not only for the treatment of minor infection but also as an ingredient in various
household products such as floor cleaners and soaps and food products such as milk and
poultry. The β-lactam ring works by targeting the cell wall of the bacteria, thereby destroying
the bacteria. The microorganisms resistant to the antibiotics evade destruction by secreting an
enzyme called β-lactamase that breaks the β-lactam ring, thus rendering the antibiotic useless.
The sensor has a U shaped bend smaller than that of a U-pin, of optical fibre coated with
polyaniline that can be dipped in the sample to be tested. The sensor is ready to be used after
coating the polyaniline with a layer of the enzyme β-lactamase. When β-lactam in the test
sample gets broken down by the β-lactamase enzyme, hydrogen ions are released, and acid
byproducts form. This alters the polymeric backbone of polyaniline- changing its form from
emeraldine base to emeraldine salt. This is seen as an increase in absorbance at 435 nm and
the amount of light absorbed is proportional to the concentration of antibiotic in the test
sample making the solution more acidic. The light is absorbed by the polyaniline coat on the
fibre that is sensitive to pH. The amount of light absorbed is proportional to the concentration
of the antibiotic in the test sample..

The researchers used their sensor to measure the concentration of antibiotics in milk, meat,
and wastewater samples that contained a known amount of the antibiotic. The researchers
found that the sensor was most sensitive when the sample was slightly acidic (pH 5.5); hence,
they used the same acidity level for other samples. The minimum concentration of antibiotics
that the sensor could detect for wastewater was twice that of milk.
The scientists found the sensor is considerably less sensitive to antibiotics in meat as
compared to milk. However, given that there are hardly any sensors to detect antibiotics in
meat, this is a significant advantage. Since most food safety administrators ban the use of β-
lactam antibiotics in poultry, this is particularly useful.

The sensor development was not free from challenges. Calibrating the sensor for use and
making it sensitive to detect the lowest possible antibiotic concentration across different
samples was one of the biggest challenges, says Dr Pooja.

When not coated with the enzyme, the sensors can be stored for a long time. However, once
the enzyme is coated, the sensor must be kept at 4°C. When manufactured on a large scale,
the sensor could cost less than ₹30-35. It is much cheaper as compared to more than ₹3000
needed for the conventional techniques in use today. Moreover, each sensor can be used
twice, which further reduces the testing cost. The researchers have applied for a patent for the
sensor and are awaiting approval.