Money rewards are less likely to improve mood if you are in pain. 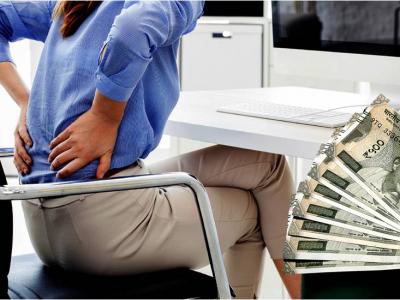 University students who experience physical pain perform worse on tasks and have lower moods than those without pain.

Everyone experiences some physical pain in life. Pain affects our mood. Research has shown that people diagnosed with long-term pain frequently experience a negative mood. Would it be similar for people whose pain is not severe enough to consult a doctor and get it diagnosed, that is, sub-clinical?

A research team comprising individuals from the University of Fribourg, Switzerland, Indian Institute of Technology Bombay (IIT Bombay), India, University of Zurich, Switzerland, and Harvard University, USA, published a paper on how cash rewards affect the mood response and behaviour of university students who experience some amount of pain daily. The researchers found that money as a reward does not improve mood in students with pain, showing that pain has a negative effect on overall mood. This paper was published in the Humanities and Social
Sciences Communication of Nature.

The study divided the sample of 79 students into two groups, one with participants experiencing no pain and the second, participants belonging to the sub-clinical population. Some of the types of pain experienced by people in the sub-clinical group were headaches, backaches, pain in the arms or legs, muscle cramps, and chest pains. The researchers chose to use a method known as the Fribourg Reward Task, used in similar studies earlier. In previous research, it was seen that individuals who have been diagnosed with long term pain perform poorly on such tasks. Their mood does not improve much after cash rewards compared to people without pain.

The participants were given either no reward, a small reward, or a large reward. The size of the reward depended on the difficulty of the task. The low difficulty task participants received a smaller reward than the high difficulty tasks. If there was no reward, the screen would skip the results screen and proceed to the subsequent trial.

Previous studies have shown that monetary rewards do not improve the performance and mood of participants who have been clinically diagnosed with pain. Hence, researchers hypothesised that participants from the sub-clinical group would show a lesser effect of monetary reward on mood when compared to the group of people with no pain. The team also investigated whether the task’s difficulty affected the interaction between pain, mood response, and behaviour.

While recruiting university students in Switzerland for the study, the researchers excluded individuals with a history of depression or other psychiatric disorders. The sub-clinical participants exhibited significant pain symptoms as reported by them on a questionnaire.The sub-clinical and no pain groups were further divided into two groups based on the difficulty of the task. All chosen participants had to do one task – either of low or high difficulty.

The results from the study were analysed using statistical software. There was no significant difference seen in the mood of the group with no pain and the sub-clinical group before the trials were conducted. In addition to the previously stated hypothesis, the authors also expected that if participants get more money, their mood will be better. The analyses showed that participants who did not experience pain did indeed have higher average mood scores for the larger reward condition than smaller. However, this was not observed in the sub-clinical pain group. There was no significant difference in mood depending on the reward. Additionally, the team observed that all participants were more accurate in the low difficulty task when compared to the high difficulty task.

“This study is the first of its kind to investigate how the reward-pain relationship works in a sub-clinical population.,” say the researchers. It gives valuable information on how pain affects reward processing without the additional effects of medicines. In terms of next steps, Professor Rashmi Gupta, Cognitive and Behavioural Neuroscience Lab, Department of Humanities and Social Sciences, IIT Bombay, says they “plan to do the same study with the university students in India to explore the cross-cultural differences.”