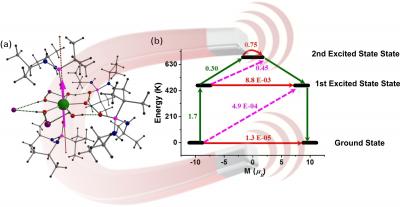 In order to sustain the progress in the ever growing digital technology, there is need for new tools and resources that more efficiently store and processes digital information along with better economic spending, lower energy consummation and low environmental impact. However, the miniaturisation of electronic devices using current silicon-based technology is about to reach its maximum limit. In order to overcome this difficulties, scientists have now turned their focus to alternative routes. One such alternative route is to use chemical synthesis for designing molecular nanomagnets (MNMs) that exhibit the classical properties of a permanent magnet below a critical temperature called blocking temperature (TB). MNMs represent the ultimate size limit in miniaturisation compared to the smallest metal nanoparticles that contain thousands or millions of atoms. The properties MNMs are purely of molecular origin and they exhibit quantum tunneling of magnetisation and quantum phase interference, properties that make them potential candidates to function as quantum bits (qubits). Electronic structure and energy level for Dy(III) MNM. (a) Computed g zz orientation of the ground state KD and (d) Possible relaxation pathways via first and second excited states Till date these properties of MNMs were only accessible at liquid helium temperatures using complexes of rare-earth metal that were unstable under ambient conditions, a feature that renders them useless for any practical applications. Our research group has rationally designed an air- stable Dy(III)-based MNM by fine-tuning the local geometry of the rare-earth ion using a sterically encumbered phosphonamideligand. The Dy(III)- based MNM exhibits a magnetic hysteresis up to 30 K with a large coercivity of ~1.5 T(2 K) and a clear blocking at 12 K with an anisotropy barrier (U eff ) as high as 735.4 K leading the way to technologically relevant MNMs that can function at higher temperatures. This work highlights the
importance of higher order symmetry and the co-ordination environment in obtaining high temperature MNMs based on lanthanides.