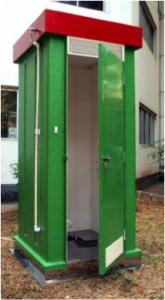 Almost 70 years after independence nearly 600 million Indians do not have access to proper sanitation. A recent technology development brings clean, eco-friendly, and affordable sanitation to the masses.

The recent elections highlighted the importance of sanitation, with competitive polemics and rhetoric being bandied about. Actually that is rather welcome. Indeed, the first Prime Minister of India said, “The day every Indian has toilet to use, I will consider India a developed nation.” The father of nation has been widely quoted as having said, “Sanitation is more important than Independence.”

The Industrial Design Centre at IIT Bombay has now designed a toilet that does not require water for flushing. The design is hence called Dry-San for dry sanitation. The research and study has been funded by Ministry of Drinking Water and Sanitation.

Professor Munshi, Industrial Design Centre, IIT Bombay explains the design. The toilet has two levels of pit, a deeper pit and a shallower pit, one above the other. The shallow pit and deeper pit are separated by means of inclining slope, created through structure of bamboos. The pan at top could be of any material, but is presently proposed to be of stainless steel for lasting value. The design has a footrest for heels to ease sitting for elderly as well as for appropriate targeting of solid waste.

The solid waste falling into shallow pit slides over bamboo support. The deeper pit provides aeration and also allows water separation. Aeration also occurs at shallow pit thus allowing rapid decomposition.The rapid decomposition along with separation of water from bottom would reduce the weight of waste by almost 90% and the decomposed pathogen free waste oozes from the other edge of shallow pit is ready to act as manure.

The design of the shallow pit also envisages multiple levels of baffles in the shallow pit, to slow the descent of waste thus firstly allowing more time for aeration of waste and separation of water from waste. Secondly the baffles would also separate decomposed waste from fresh waste. Interestingly, the design separates urine from solid waste by collecting it from the front end of the pan into a separate container. Vapour odours are kept away from air by means of polystyrene balls that float above and allows retention of fertilizer value.

The design is already being used at one place at IITB for few months, proving its utility and practicality. The next step would be to test the design at 100 locations before a massive roll out on confirmation of suitability. While fabrication costs are presently around Rs. 30,000, mass production would bring down costs to below Rs. 10,000 thus making national implementation feasible.