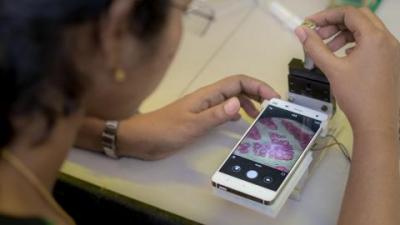 IIT Bombay researchers develop techniques to make tiny, inexpensive lenses that can be used on smartphones

Would it not be nice if we could attach a tiny, low-cost lens to our smartphones to have an in-depth look into our blood cells, or identify fake currency notes? Now Prof. Soumyo Mukherji and his group of researchers from the Indian Institute of Technology Bombay (IIT Bombay) have developed a robust and inexpensive technique to make small lenses that can do just that. In the annual science and technology festival of IIT Bombay, TechFest 2018, the exhibit of these lenses among other displays of his lab attracted big crowds.

Traditionally, lenses have been fabricated by polishing and grinding glass or moulding plastic against a template. These methods are expensive as they require skilled workmanship and costly equipment. A newly developed alternative is to make them using fluids. However, this too presents challenges as one needs a mechanism to manipulate the liquid to make the lens and then stabilise it to ensure that there are no further flows in the fluid.

If you partially fill a glass test tube with water, you will notice that the water surface is not flat, but instead crescent shaped. Similar crescents, called menisci, of differing curvatures, form at the interface between any two fluids. The researchers make use of this property to make their lenses using Polydimethylsiloxane (PDMS), a silicone elastomer.

The researchers poured PDMS on a fluid with which it does not mix, like glycerol or water. It forms a crescent shape at the interface between the fluids. A hot air gun is then used to “cure” the PDMS which essentially allows it to be peeled off, thereby giving it the crescent shape of the interface. Furthermore, by applying an additional pressure at one end of the fluid interface, the researchers could change the shape of the crescent, and thereby alter the curvature of the lens to change the magnification. The technique has been detailed in a study published in the Journal of Biomedical Optics.

“This is a simple, inexpensive and off-the-shelf approach to fabricate miniature lenses reproducibly. We can tune the curvature using a simple pressure control mechanism to generate a programmable mould for lens fabrication. Hitherto, reproducible fabrication of such lenses was a challenge as they required controlled dispensing of viscous liquid. In our research, we show that this approach can produce lenses with highly reproducible curvatures,” says Prof Mukherji.

“The lenses fabricated using this technique have a spherical profile, which inherently suffers from spherical aberration,” explains Dr Bhuvaneshwari Karunakaran, who developed this technique as part of her PhD work at IIT Bombay, highlighting the drawback of spherical lenses. Spherical aberration is a phenomenon where light rays that strike the edges of the lens do not focus at the same location as the light that comes through the centre of the lens, giving rise to blurred images. To solve this problem, the team of researchers have developed an alternative technique, based on the same principles, to make aspherical lenses. “Such lenses have better performance compared to spherical lenses,” says Dr Karunakaran. This approach is detailed in another study published in the Proceedings of SPIE Optical Engineering and Applications.

The researchers have used these lenses to develop a ‘smartphone microscope’ where a fabricated lens is simply placed on a smartphone camera. The microscope has a resolution of 1.4 micrometer, comparable to an optical microscope, and was used to detect pollen grains on a slide and micro-patterns on banknotes. The researchers say that by using their lenses, smartphones could potentially be used to verify the authenticity of currency notes.

Besides, these lenses can be used for a wide range of biomedical applications. “It can be used to identify infected cells in a stained malaria-infected human blood smear and in other biomedical applications such as endoscopes (devices for examining interiors of hollow organs or cavities), otoscopes (devices for examining ears), sperm counting, dental examination and minimally invasive surgical procedures. It can also be used in designing optical systems for identifying contaminants in water such as microalgae and for other forensic applications,” explains Dr Karunakaran.

Converting innovative technological research into usable products can often be a challenge. But the researchers behind this work are looking forward to commercialising them. “We are in talks for further collaboration to integrate these fabricated lenses with miniature devices in which fluids can be collected and manipulated for applications such as malaria detection,” signs off Prof Mukherji, detailing the plans for the future.