Jellow communicator: A communication aid for children with speech difficulties 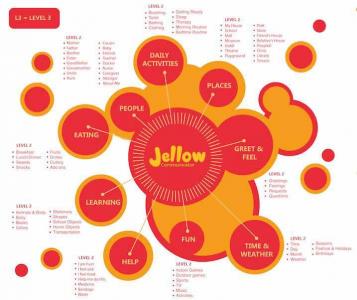 Children with developmental disabilities including Cerebral Palsy and Autism Spectrum Disorder frequently have speech impairments. Based on the 2011 census, there are around 1.9 million individuals with speech disability in India, of which around 80% completely lack speech or have unintelligible speech. Lack of a functional mode of communication can impede children’s overall social communication, emotional, and cognitive development. Therefore, in this project, we have developed a friendly, freely downloadable Augmentative and Alternative Communication (AAC) app that uses icons to help users communicate their needs and feelings with caregivers.

Our Android app called Jellow Communicator,which is compatible with mobiles and tablets, is meant to serve as a beginner-level communication aid for people with speech impairments. Although primarily designed for children, the app can also easily be used by adults with communication difficulties following stroke or head injury and elderly people with poor speech capacities. The app is available in Indian and International versions. The Indian version is available in English and Hindi and the International version allows the user to switch between American and British accents.

This pictorial tool has an intuitive and easy-to-learn visual interface comprising 9 central category buttons and 6 expressive side-buttons. Thecontent of the 9 central category buttons has been developed to include the common activities/objects that children encounter in their daily lives including, ‘Eating’, ‘Fun’, ‘People’, ‘Places’, etc. Moreover, a novel Visual Emotional Language Protocol (VELP) comprising the expressive side-buttons of ‘like’, ‘don’t like’, ‘yes/want’, ‘no/don’t want’, ‘more’, and ‘less’ was conceived for the purpose of the app. To speak using Jellow, the user simply clicks on a category button followed by any of the expressive buttons. For instance, by clicking on ‘Eating’ followed by ‘want’, the app speaks out aloud, ‘I want to eat’.

Jellow currently has around 800 icons and around 8200 lines of pre-programmed text. In addition, the ‘keyboard’ feature can be used to typeand speak out aloud novel content. The unique feature in Jellow is that the app content (icons and vocabulary) has been appropriately contextualised to suit the native socio-cultural and linguistic sensibilities.