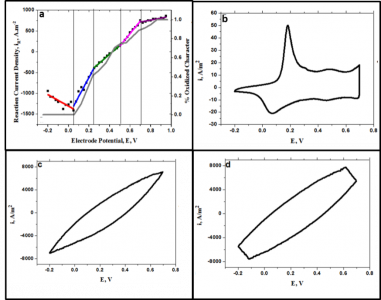 Intrinsically conducting polymers such as polyaniline, polythiophene, polypyrrole and polyethylenedioxy thiophene are not only good conductors of electricity, but also possess a property called pseudo-capacitance, which allows them to store electric charge through redox reaction. They therefore possess much higher power density than a battery and phenomenally higher energy density than a capacitor. This dual advantage makes them useful as ‘flywheels’ in energy storage systems. These ‘flywheels’ store surplus energy and provide it when needed. In this role, conducting can considerably enhance the energy utilisation efficiency of electrical systems such as electric vehicles, smart power grids and solar cells. To use these polymers optimally, it is necessary to understand the dynamics of charge storage in them. It is known that in conducting polymers, charge is stored in different energy bands. However, the way the electric charge fills these bands depends greatly on the rate at which the polymer is being charged.

Our study aims to characterise the band structure and mathematically model the charging dynamics of these polymers. We use different techniques such as step voltammetry, reactive voltammetry, cyclic voltammetry and impedance spectroscopy to quantify the dynamics. The energy band structure of polyaniline and cyclic voltammograms on polyaniline film at different voltage scan rate is shown in the figure. The different shapes of voltammograms are indicative of the stark difference in the way the charging occurs at different charging rates. Understanding this dynamics is of crucial importance for designing energy storage systems and also for modifying the polymer itself in order to achieve the desired band structure and chargingdynamics.