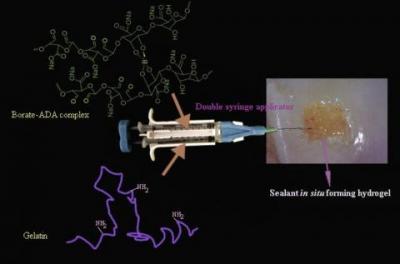 IITB has developed a potentially minimally invasive cartilage regeneration technique which could be a painless, inexpensive, and non-toxic method to cure osteoarthritis.

Osteoarthritis is a progressive musculo-skeletal disorder, which affects around 10% of the population worldwide above the age of 60 years, causing gradual degeneration bone joints.  Cartilages are the flexible soft tissues that cover the ends of bone in a joint. Over a passage of time, with the breakdown of  cartilages, bones start to rub against each other causing stiffness, pain and loss of joint movement.  A team of researchers from the Department of Bioscience and Bioengineering at IIT Bombay is working on cartilage regeneration using naturally occurring biopolymers. Biopolymers are polymers of natural origin and form hydrogels which mimic the extracellular matrix (ECM) and promote tissue growth. Hydrogels are hydrophilic polymeric networks which can absorb water but are prevented from dissolving due to their cross-linked structure. Many biopolymers are in fact components of the ECM and can regulate division, adhesion, differentiation, and migration of cells more favorably than synthetic polymers.

Dr. Biji Balakrishnan under the mentorship of Prof. Rinti Banerjee of Department of Biosciences & Bioengineering has developed an in situ gelling biopolymeric hydrogel system which can be injected to the site of injury as a liquid, which solidifies after about twenty five seconds assuming the shape of the cartilage defect. This biopolymeric hydrogel prepared using polysaccharides and proteins, acts as a scaffold for regulating division, adhesion, differentiation and migration of healthy cells (chondrocytes) in cartilage and helps in the regeneration of the cartilage.

This technique of generating hyaline cartilage is chemically and mechanically better in comparison to the existing techniques. It takes less than a minute to inject the biopolymers into our body using a syringe mechanism. The biopolymeric derivatives for the preparation of hydrogels are also easy to manufacture and are biocompatible. They also produce negligible inflammation and oxidative stresses. Since the hydrogel gets degraded as the regeneration of cartilage proceeds, there is no need for any surgical intervention to remove it. The properties of hydrogel can be tuned by changing the concentration of biopolymeric derivatives. If required, growth factors or drug molecules can also be incorporated within this hydrogel by simple mixing with biopolymeric solution. The amount of hydrogel to be injected is decided by the degree of cartilage defect.

Though this approach has been investigated for cartilage regeneration, it is not limited to it and can be extended for regeneration of other tissues. Methods used are simple while circumventing toxicity, stability and scale up issues making this injectable system feasible, minimally invasive and easily translatable for therapeutic and regenerative purposes.