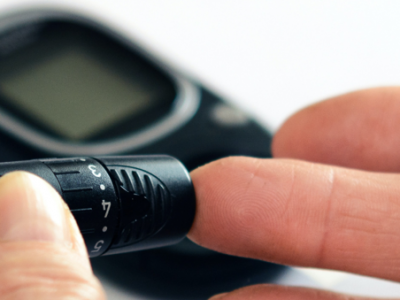 Electrochemical biosensors are measuring systems that produce electric current proportional to the concentration of specific molecules amongst many. They can be used to detect cancers or other diseases early, measure pollution, or detect food contamination. Gallium nitride (GaN) is one of the newer materials in the semiconductor industry for producing high-density electronic circuits. It has become the preferred material for control circuits in electric vehicles, thus boosting the growth of GaN technology. Since GaN transistors are robust, sustain high voltages, and switch faster, they are suitable for high power and high-frequency application. These properties also allow them to sense small changes in charge, making them a good candidate for electrochemical biosensors.

The manufacturing process for GaN devices is expensive and complex and is still emerging. Accurate mathematical models needed to minimise trial and error are not available for GaN biosensors yet. Researchers from the Indian Institute of Technology Bombay (IIT Bombay) have developed a model for the GaN biosensor more accurate than the currently available models. The model considers the surface charge at the interface of the transistor and the
solution that contains the ‘analyte’ –– the biomolecule to be detected, which earlier models did not consider. Their research was published in the journal IEEE Sensors Letters.

A GaN biosensor is based on a three-terminal nanodevice called ‘bio- high electron mobility transistor’, abbreviated bioHEMT. Its two terminals, called source and drain, are connected by a current-carrying channel in the semiconductor material. The third terminal, called the gate, controls the current flowing in the channel. The gate is coated with a layer of biorecognition element (detector) and exposed to the analyte solution. The interaction between the analyte and  he detector molecules results in an electric charge that changes the gate voltage, thus changing
the current through the transistor. The change in current is proportional to biomarker concentration and can therefore be used to measure it. “HEMTs make it possible to detect very minute changes in biomarker concentrations and could be used as early warning sensors to detect minute anomalies,” informs Prof Siddharth Tallur, an author of the current study.

A thin double layer of charge is formed at the interface of the gate and the analyte solution. Previous models describe this layer as a dielectric. A dielectric is an electric insulator on which charge is deposited. In reality, the double layer acts as if it stores charge, that is, a capacitor.“The charges in the double layer influence the current flow in the transistor. Thus, if we do not account for their contribution, it can result in erroneous estimates of the analyte
concentration,” explains Prof Tallur. The resulting device designed based on an incomplete model may not be able to detect small changes in a biomarker concentration as expected. “An accurate model can help designers tweak the sensor device parameters to manufacture exactly to specification. It will reduce development costs and ease the adoption of the newer GaN technology,” says Prof Tallur.

In the model the researchers created, they derived a mathematical expression that calculates the current through the device based on the electrical and physical properties of the biosensor, the biomarker concentration and the voltage applied at the gate. They followed a methodology akin to that used for silicon devices. They considered the charge layer at the interface while deriving this equation. To demonstrate their model, they used it to model the performance of a device to detect a molecule called prostate-specific antigen, the concentration of which increases in the case of prostate cancer. For different molecule concentrations, the researchers calculated the current flowing through the device as the voltage at the gate varied.

The researchers say that the model could be extended to accurately estimate sensitivity for biosensors that can detect other types of cancer and various diseases characterized by early warning biomarkers. Gallium nitride devices can operate in harsh conditions, such as highly corrosive and high-temperature environments. This makes the GaN devices an attractive option for developing robust and reliable, high sensitivity environmental monitoring sensors with long service life, such as agricultural sensors for water quality monitoring, “With the growing adoption of GaN-based chips across various industries, the application space for GaN-based biosensors is expected to grow significantly in the coming years,” concludes Prof Tallur.