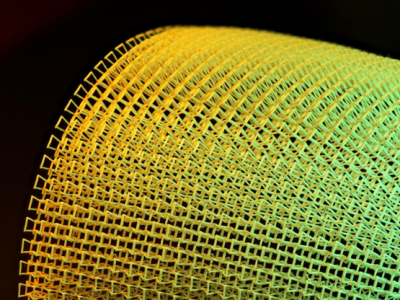 Air travel these days has become pretty smooth, with passengers feeling very little vibrations while seated in the cabin. Engineers install palm-sized devices on the aircraft wings and cabin windows to dampen the vibrations from the huge aircraft turbine engines and the surrounding atmosphere. These devices are made of piezoelectric materials, which generate a large vibration-cancelling force when an electric signal is applied.

Piezoelectric materials are also used as sensors or moving parts controlled by an electric signal in micrometer- and nanometer-sized devices. In a recent study, researchers from the Indian Institute of Technology Bombay (IIT Bombay) have proposed a new piezoelectric material with a better piezoelectric response than the commonly-used piezoelectric ceramics. That is, the material could produce a large force from a small input electric signal. Their findings have been published in the European Journal of Mechanics - A/Solids. The research was partially supported by IIT Bombay.

The novel material, called Graphene Reinforced Piezoelectric Composite (GRPC), has fibres of PZT (lead zirconate titanate) — an often-used piezoelectric material — and graphene nanoparticles embedded in an epoxy base. PZT is very brittle and requires epoxy to enhance the material’s strength. “We chose epoxy because it is easily available in the market and easy to work with,” says Prof. Susmita Naskar from IIT Bombay explaining their choice of material.

The team investigated GRPC’s piezoelectric response and elastic coefficient using theoretical and computational models. These theoretical models used the properties of each constituent material and their proportions to calculate these properties. Some models also considered how the different components interacted with one another. While theoretical models can provide quick insights, they are still limited by their assumptions, which need to be investigated. “Our computational models accounted for the different shapes and orientations of PZT fibre and graphene nanoparticles,” adds Dr. Kishor Balasaheb Shingare of IIT Bombay, explaining the importance of their computations.

Dr. Shingare investigated both GRPC and the conventional PZT-epoxy material- a piezoelectric ceramic- and compared their properties. They applied an electric field and stretched the materials in different directions in the simulation to check for stress developed in the materials. They observed that both piezoelectric and elastic properties of GRPC were better than in conventional PZT-epoxy materials. The presence of graphene made deformation more difficult, and the GRPC devices could remain rigid and maintain their shape while also generating about double the force in the presence of electric fields. “Graphene is a very light material and yet extremely stiff. The main reason behind the improved effective properties (in GRPC) is due to graphene, which has a large surface area for interaction with PZT fibre and epoxy,” explains Dr. Shingare.

This study can help make more effective piezoelectric-based devices in the future. Building robots or satellites require light materials that are multipurpose, and the researchers envisage that GRPC could be a very good fit for that.