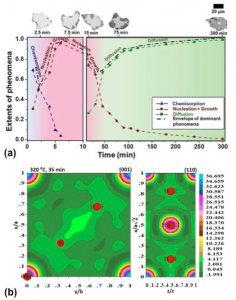 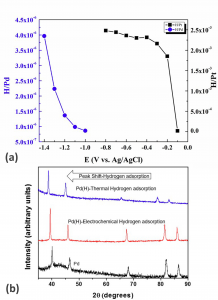 MgH 2 is a promising material for on-board vehicular hydrogen storage applications, due to its high gravimetric capacity (7.6 wt. %). If employed efficiently, it has the potential to be utilised in Proton Exchange Membrane (PEM) fuel cells, which can replace the conventional IC-engines driven by fossil fuels. However, its application is limited by its slow kinetics of hydrogen absorption and desorption collectively known as ‘sorption’.Hydrogen sorption mainly involves several kinetic phenomena Eg. chemisorption (H-atom dissociation/recombination), nucleation and growth of metal or hydride by interfacial movement (NG) and/or diffusion. Our rigorous experimental and mathematical analysis supported by electron microscopic observations suggests that multiple phenomena can simultaneously control the hydrogen absorption in Mg to varying extents with time (Fig. 1a). Hence, the rate controlling phenomenon can change with time, contrary to the popular belief in literature. During hydrogen desorption the charge density maps reveal that not all the hydrogen atoms are equivalent in their removal from the MgH 2 unit cell (Fig. 1b), hence can be individually affected by the transition states formed upon catalyst addition.