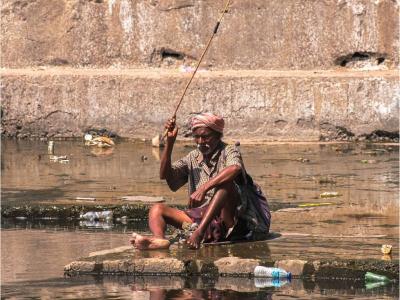 There is an old saying about the Ganga, ―No child is too dirty to be embraced by its mother.‖
However, in modern India, this statement now drowns in irony, as the Ganga is far too dirty to
embrace anyone. Almost all water bodies share the same plight— 80% of India’s surface water
is contaminated as 40527 million litres per day of untreated wastewater is discharged into rivers
and lakes every day.

Contaminated water has devastating effects in developing countries like India, where there is
inadequate healthcare and a severe lack of hygienic water for consumption. Diarrhoea, for
example, a treatable disease, takes the lives of over 4,00,000 children annually in India due to
improper sanitation. To address the source of the problem, Prof Pradip Kalbar, a researcher from
the Indian Institute of Technology, Bombay, has proposed a paradigm shift in India’s wastewater
treatment system.

The sewage treatment plants (STP) in India can currently treat only 44% of total generated
wastewater. In addition to this, these treatment plants do not satisfy the current discharge
standards issued by the National Green Tribunal (NGT) in 2019. The pre-existing treatment
plants need to be updated to meet the tribunal’s stringent requirements. New treatment plants
need to be set up to account for the staggering 56% of wastewater discharged without any form
of treatment. Such a large-scale effort presents multiple challenges as the treatment plants in
their present form would not sustainably meet the tribunal’s new requirement. Upgrading them
will need too many resources and significant capital. Therefore, a systematic change of
wastewater treatment in India, such as the one Dr Kalbar has proposed, is the need of the hour.
Sewage treatment plants are of two types— mechanised treatment systems and natural treatment
systems. Mechanised systems, such as bioreactors, achieve treatment by creating an artificial
environment using chemicals, tanks, pumps and other components to eliminate the contaminants.
Natural systems, on the other hand, rely entirely on natural processes. In India, constructed
wetlands are the predominant form of natural systems in which wetlands are artificially
constructed to mimic the filtration processes of natural wetlands. The plants, micro-organisms
and substrates of these constructed biological systems eliminate the contaminants.
Mechanised and natural systems have their advantages and disadvantages— mechanised systems
require less land but are more expensive as they are energy-intensive and require external
reagents. Natural systems such as constructed wetlands require more extensive land for
operation. Still, they are significantly cheaper as the processes are entirely natural and require
minimal maintenance and external input. For these reasons, natural systems should be given
preference.

Before the tribunal’s order, the treatment plants were required to ensure that the treated water
had a biochemical oxygen demand (BOD) level less than 30 mg/L. Here, BOD represents the
amount of organic matter (pollutant) in the wastewater— the lesser the organic matter, the lesser
the BOD. The revised requirements needed the treatment plants to ensure that their treated water
has a BOD level of less than 10 mg/L. A lower BOD means that the water is cleaner, and the
recycling of wastewater can be increased. Attaining this new standard with the current system
would be very unsustainable with either of the methods.

Mechanised systems are feasible until a BOD of 30 mg/L. Any further purification would
increase the costs multifold as this requires advanced treatment technologies. Similarly, natural
systems such as the constructed wetlands would need extensive land to meet the requirements
since land requirement grows in multiples for every additional BOD to be removed. To solve this
problem, Dr Kalbar proposes a novel system called the hybrid treatment system, which pairs
both mechanised systems and natural systems to achieve the discharge requirements.
First, the wastewater (typically having a BOD of about 300 mg/L) is treated with a mechanised
system, and it is brought to a BOD of 30 mg/L. As further treatment with mechanised systems
would require too many resources, the water is now treated with a natural system until a BOD of
10 mg/L is attained. The land required by natural systems to bring down the BOD to 10 mg/L in
this hybrid system is significantly less as a majority of the treatment is done by the initial
mechanised treatment. Thus, using both systems in combination, we can achieve the desired
BOD level without splurging on costs and taking up too much land. Even if land costs are
accounted for, the hybrid system would still be cheaper than purely mechanised systems as the
former doesn’t demand a constant supply of resources to operate. During the typical lifetime of
30 years for a treatment plant, a mechanised system would accumulate annual costs that would
exceed the initial land investment required for a hybrid system.

The use of hybrid systems in place of high-demand mechanised systems for treatment beyond 30
mg/L significantly reduces costs and resources. Deploying such systems throughout the country
to meet the treatment deficit and the tribunal’s requirements would ultimately lead to an annual
savings of 540 GWh, enough to power all of Mumbai for half a year. Natural systems such as the
wetlands are also better at removing nutrients, organic matter and contaminants like
pharmaceuticals and disinfectants. Dr Kalbar notes that they can expand the current study by
estimating the effectiveness of hybrid systems on parameters other than just BOD levels. A
proper evaluation of the social benefits of hybrid systems (employment and revenue) and their
feasibility in treating the toxic wastes generated by industries are future objectives for this study.
―Currently, highly mechanised systems are proposed/used for sewage treatment, even in the
periphery of cities, and small-town and rural areas. If hybrid treatment systems are used, they
will create jobs for local people. Revenues generated from the by-products can boost the local
economy and contribute to Atmnirbhar Bharat (self-reliant India),‖ added Dr Kalbar.

The vast deficit in wastewater treatment in India presents us with the opportunity to completely
reform the existing system and improve the quality of discharged water. We can significantly
increase sustainability on all fronts. As sewage treatment plants are usually located on the city’s
outskirts, the proposed hybrid systems can be set up with minimal land constraints if
appropriately planned.