How fast you cool molten iron determines its properties 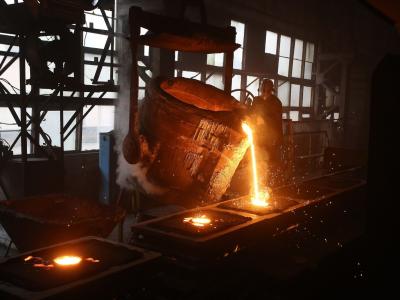 Cast iron, an alloy of iron with carbon, is widely used for making machine and automobile parts.
In its liquid form, it flows easily, hence can be poured into moulds, offering intricate detailing in
the part shape. It may be less ductile and malleable than wrought iron or less stiff than steel, but it
has a lower melting point than other forms of iron and cannot be compressed easily.
A more ductile variety of cast iron, called spheroidal graphite iron, is used for making automotive
parts. The ductility, hardness and quality of the iron is determined by how fast the iron cools in
the moulds. In a recent study, researchers from the Indian Institute of Technology Bombay (IIT
Bombay) proposed an improved model for the cooling of molten spheroidal graphite iron that can
optimise the cooling process in iron-manufacturing industries for better quality cast iron. The
study, published in Metallurgical and Materials transactions B, was partially funded by John
Deere India Pvt. Ltd.

Spheroidal cast iron is made by extracting pure molten iron from iron ore, adding carbon, silicon
and other elements to it and letting it cool in moulds of desired shapes. A small amount of carbon is dissolved in it and the rest is in the form of micrometre-sized graphite nodules. There is a
problem, though—in moulds of complicated shapes, the molten iron doesn't cool uniformly,
causing non-uniform size and distribution of graphite nodules. “Non-uniformly distributed
graphite nodules can make the component weaker, and the part may break during operation.
Usually, smaller sized nodules, distributed uniformly, lead to better mechanical properties, such
as higher ductility and strength,” says Prof Shyamprasad Karagadde of IIT Bombay, an author of
the study.

Iron manufacturers can control the size and distribution of graphite nodules by tweaking various
production parameters such as the surface area and depth of moulds, the temperature at which
molten iron is poured into it, and the cooling rate. However, optimising these parameters requires
the foresight that computer simulation models can offer. In the current study, researchers built an
improved model to simulate the cooling process of molten iron and relate it with the properties of
graphite nodules.

In the simulations, the researchers used a macro-model to calculate the temperature of the molten
spheroidal graphite iron at short time intervals, as it cooled. They tracked the growth of several
graphite nodules at different temperatures using a micro-model. Broadly, the micro-model
emulated three different stages of cooling- graphite nodules surrounded by liquid iron, the nodules
enclosed by ‘shells’ of iron, and wholly solidified iron. During the initial stage, the graphite
nodules grow the fastest. Still, in previous models, researchers had not considered this stage as it
is short-lived. “Introducing our mathematical model for the initial stage led to better prediction of
the size and distribution of graphite,” points out Prof Karagadde.

The size of components manufactured in industries is usually a few tens of centimetres, while the
graphite nodules are roughly a million times smaller and micrometre-sized. It is difficult to track
the growth of each graphite nodule. “So instead, our macro-micro models predict the average size
and number of graphite nodules in smaller regions (say about a few millimetres long) obtained by
dividing the entire component into many smaller volumes,” comments Prof Karagadde.
Since the macro-micro model gives average predictions, it is not very accurate. To improve the
predictions, the researchers further studied a single, isolated graphite nodule. A graphite nodule
grows mainly through the diffusion of carbon from liquid iron into the nodule. After the molten
iron completely solidifies, the nodule grows some more as insoluble carbon from surrounding iron
adds to it. The researchers simulated this growth of a single graphite nodule using a method called
‘deforming grids’- they studied diffusion in small volumes of liquid iron called grids. “The
deforming grids method, which is very accurate for a single graphite nodule, gave us a correction
factor for the macro-micro model. We call this a multiscale approach as we used information from
two models of two different scales,” says Prof Karagadde.

To validate their simulations, the researchers set up an experiment. They made spheroidal graphite
iron blocks in moulds of different depths and rates of cooling. Deeper moulds had smaller surface
areas for the same mass of iron, and cooled the slowest. They measured the temperatures of the
cooling iron and studied the properties of graphite nodules, and compared them with predictions
from their simulations.

The initial temperatures that their simulation calculated matched the observations, but the
temperatures calculated post the second stage of cooling dropped about 10-15 minutes earlier than
what was observed in moulds that cooled slowly. According to the researchers, these deviations
occurred because it is challenging to model the heat loss from moulds. “Moulds made from sands
like silica sand contain some moisture that evaporates when hot liquid iron is poured. These fumes
and small cracks in the sand disturb the flow of heat and are difficult to model,” explains Prof
Karagadde. “However, these deviations may not lead to a significant change in the final predictions
of the graphite nodules,” he adds.

The researchers analysed samples from their iron blocks for the final size and distribution of the
cooled graphite nodules. Their observations and data from previous works exactly matched with
their final simulation results, although their transient predictions of size during the cooling
deviated by about a quarter of its actual volume. Unlike transient predictions, final predictions
could be corrected using deforming grids method and were more accurate. In general, they saw
that when molten iron cools slowly- like in the deeper moulds - the graphite nodules are smaller
and more uniformly distributed.

This study modelled all the three stages of cooling of molten iron and introduced a new multiscale approach, giving better predictions about graphite nodules. "Our simulation models can help iron-
manufacturers avoid significant material wastage and save time. We are now looking to improve

the predictions in other varieties of cast iron that have a different chemical composition,” Prof
Karagadde signs off.