History of Giants in the Gene: Scientists Use DNA to Trace the Origins of Giant Viruses 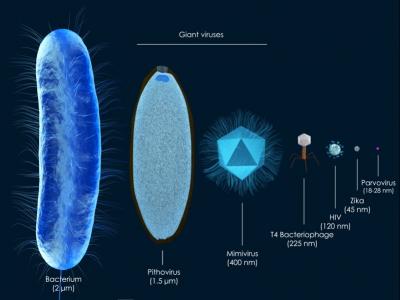 Scientists investigate the evolution of Mimivirus, one of the world’s largest viruses, through how they replicate DNA

Researchers from the Indian Institute of Technology Bombay shed light on the origins of Mimivirus and other giant viruses, helping us better understand a group of unique biological forms that shaped life on earth. In their latest study published in Molecular Biology and Evolution, the researchers show that giant viruses may have come from a complex singlecell ancestor, keeping DNA replication machinery but shedding genes that code for other vital processes like metabolism.

2003 was a big year for virologists. The first giant virus was discovered in this year, which shook the virology scene, revising what was thought to be an established understanding of this elusive group and expanding the virus world from simple, small agents to forms that are as complex as some bacteria. Because of their link to disease and the difficulties in defining them—they are biological entities but do not fit comfortably in the existing tree of life— viruses incite the curiosity of many people.

Scientists have long been interested in how viruses evolved, especially when it comes to giant viruses that can produce new viruses with very little help from the host—in contrast to most small viruses, which utilize the host’s machinery to replicate.

Even though giant viruses are not what most people would think of when it comes to viruses, they are actually very common in oceans and other water bodies. They infect single-celled aquatic organisms and have major effects on the latter’s population. In fact, Dr. Kiran Kondabagil, molecular virologist at the Indian Institute of Technology (IIT) Bombay, suggests, “Because these single-celled organisms greatly influence the carbon turnover in the ocean, the viruses have an important role in our world’s ecology. So, it is just as important to study them and their evolution, as it is to study the disease-causing viruses.”

In a recent study, the findings of which have been published in Molecular Biology and Evolution, Dr. Kondabagil and co-researcher Dr. Supriya Patil performed a series of analyses on major genes and proteins involved in the DNA replication machinery of Mimivirus, the first group of giant viruses to be identified. They aimed to determine which of two major suggestions regarding Mimivirus evolution—the reduction and the virus-first hypotheses— were more supported by their results. The reduction hypothesis suggests that the giant viruses emerged from unicellular organisms and shed genes over time; the virus-first hypothesis suggests that they were around before single-celled organisms and gained genes, instead.

Dr. Kondabagil and Dr. Patil created phylogenetic trees with replication proteins and found that those from Mimivirus were more closely related to eukaryotes than to bacteria or small viruses. Additionally, they used a technique called multidimensional scaling to determine how similar the Mimiviral proteins are. A greater similarity would indicate that the proteins coevolved, which means that they are linked together in a larger protein complex with coordinated function. And indeed, their findings showed greater similarity. Finally, the researchers showed that genes related to DNA replication are similar to and fall under purifying selection, which is natural selection that removes harmful gene variants, constraining the genes and preventing their sequences from varying. Such a phenomenon typically occurs when the genes are involved in essential functions (like DNA replication) in an organism.

“Our findings are very exciting because they inform how life on earth has evolved,” Dr. Kondabagil says. “Because these giant viruses probably predate the diversification of the unicellular ancestor into bacteria, archaea, and eukaryotes, they should have had major influence on the subsequent evolutionary trajectory of eukaryotes, which are their hosts.” In terms of applications beyond this contribution to basic scientific knowledge, Dr. Kondabagil feels that their work could lay the groundwork for translational research into technology like genetic engineering and nanotechnology. He says, “An increased understanding of the mechanisms by which viruses copy themselves and self-assemble means we could potentially modify these viruses to replicate genes we want or create nanobots based on how the viruses function. The possibilities are far-reaching!”