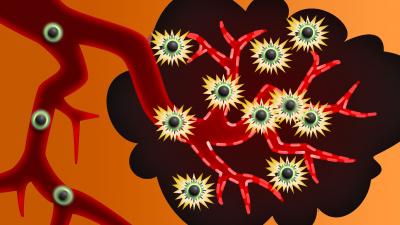 How safe are gold nanostructures for treating cancer patients?  Quite safe now says a research team at IITB. The team has engineered a new gold nanoparticle called Lipos Au NPs that has unprecedented potential to cure cancer in a biologically safe and noninvasive way.

Since ancient times, gold has been mythicized as the elixir of life –an element with miraculous power to cleanse, rejuvenate, and fortify the human body, and even prolong life by curing a multitude of diseases. It  perhaps these myths that motivated the first nanotechnologists – those who manipulate matter at the atomic, molecular, and supramolecular level – to create and test the viability of gold nanoparticles (NPs) as diagnostic and therapeutic  agents in cancer treatment. The results have been mostly promising.  Gold NPs do not kill heathy tissues – a singular advantage over radiation and chemotherapy. They can be targeted at specific tissues and cells. They can carry and release anti-cancer drugs in a time controlled manner. Last but not the least, their intrinsic optical properties can be harnessed for both imaging and photothermal destruction of malignant cells. However, there’s a chink in this gold armour – gold is not biodegradable. This means that our bodies cannot break down the gold NPs and clear them through the kidneys. Once the gold NPs are introduced into the physiological system, they accumulate in organs and pose potential health risks for the patient. In a breakthrough research effort, Dr. Rohit Srivastava and Dr. Rinti Banerjee at IIT Bombay collaboratively engineered a multifunctional gold NP called Lipos Au NPs that combines conventional drug delivery with photothermal therapy (PTT), and optical imaging. It is also the first reported instance of a NP that can degrade to a size of 5nm in the presence of heat energy – a behavior that makes it compatible with renal clearance. This research appears as a paper in the prestigious Nanoscale journal published by the Royal Society of Chemistry.

While gold NPs offer new possibilities for targeted cancer therapies, the design challenges are many. For example, it is proven that shape, size, and structure of gold NPs can either increase or decrease its effectiveness by orders of magnitude. Drawing on their extensive experience of engineering gold NPs, the IITB research team implemented a core-shell structural effect for the Lipos Au NPs by placing a bio-degradable lipid core within a gold shell. The lipid core can carry a drug and release it when exposed to near infrared (NIR) light. However, "the novelty of the Lipos Au NPs" explains Dr Aravind Kumar Rengan, who is also the first author on the paper, "does not lie in its drug delivery application though it could be one of its uses; it lies in its unprecedented potential for curing cancer in a biologically safe and noninvasive way."

Aravind explains: When NIR light is directed on the Lipos Au NPs, it interacts with the NPs releasing tremendous amount of heat energy. This heat energy is what causes the otherwise non-biodegradable gold to break down into particles of 5nm size, which can then be naturally eliminated by the body. This, as already discussed, has huge implication for healthcare. Additionally, the released heat energy can directly kill cancer cells, which could eventually eliminate the need for using any toxic drugs on patients.  "A less obvious benefit of PTT," he adds, "is that unlike surgical intervention, Lipos Au NPs can reach the remotest region of the body in a totally noninvasive way." Overall, the synergy between the multiple functional aspects of the Lipos Au NPs could significantly enhance the quality of treatment for cancer patients.

How far are we from the clinical application of this technology?  There’s good news on this front too. Aravind enthusiastically notes that human clinical trials involving similar NPs are already underway in the US. It may, therefore, not be long before the mystical healing power of gold is manifest in our lives.