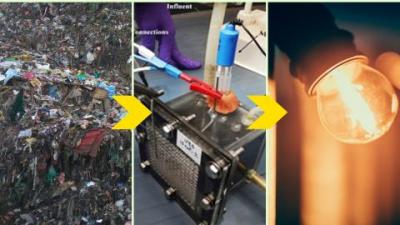 Most Indian cities are plagued with the problem of inefficient waste management and increasing emissions from fossil fuels. Both these are hazardous to the environment and to our health.  On the one side, we are pushing for strategies that harness municipal waste, and on the other side, renewable energy sources like solar and wind are gaining traction to solve the problem of pollution from fossil fuels. What if there was a single solution that would help address these two issues? A new study by Prof. Prakash Ghosh and his team from the Indian Institute of Technology Bombay (IITB) has proposed an efficient design of microbial fuel cells (MFCs) that produces electric energy using waste from landfill.

Landfill leachate is a dark liquid that is commonly produced in three ways: when rainwater seeps through the body of a landfill, when moisture in the waste drains through it, or when groundwater leaks into a landfill area. Thanks to the toxic substances in the landfill, this leachate is heavily polluted and if left untreated, can pollute the surrounding groundwater too. But, in addition to toxins, it also contains a wide range of organic and inorganic nutrients, which release energy when broken down. It is this energy that the researchers propose to use in their MFCs.

“There is an increased interest in the industrial and research fraternity either to reduce the treatment costs incurred for the wastewater treatment or to get value-added products from municipal waste. Biological fuel cells potentially offer solutions to all these problems as they offer the possibility of harvesting energy from organic wastes and renewable biomass”, says Jayesh Sonawane, the lead author of the study. In this study, the researchers have analysed if landfill leachate, the liquid that percolates through a landfill, could be used in MFCs as a substrate for chemical reactions involving microbes.

A microbial fuel cell works on the principle of oxidation of organic materials by microorganisms. It consists of a positive and a negative terminal, separated by a membrane that allows positively charged ions to pass through it. This set-up is immersed in a substrate solution rich in organic compounds and containing microorganisms. When the microorganisms break down the organic compounds, they generate negatively and positively charged particles, which move towards the oppositely charged terminals. Thus, this flow of charged particles results in the generation of electrical energy

An important aspect of producing electricity with MFCs is that it is a self-sustaining process; the microorganisms present in the substrate continue to break down the organic compounds and reproduce continuously, as long as the substrate is supplied.

In this study, the researchers fabricated three similar MFCs by using acrylic and graphite sheets for the positive terminal, and flexible carbon paper with platinum-coated carbon powder. Each MFC had a different area of the negative terminal.  They then fed the landfill leachate as a substrate to these cells in batches. For the first cycle lasting 17 days, they recorded a maximum voltage of 1.23V, 1.2V and 1.29V respectively, generated in the three cells. These were the highest recorded value of voltages reported so far for MFCs that use landfill leachate as the substrate! The maximum voltage of 1.29V is quite high as compared to 534 mV, the highest among several other studies conducted previously. In addition, the researchers observed that the  rate of energy flow per unit volume of the cells increased with the increase in the area of the electrodes. The researchers will further explore the reasons for the generation of high voltage.

“The goal of the study was to produce high power output using landfill leachate by the optimized system architecture. MFCs can be operated in the broad range of substrates. In our finding, we could achieve the highest voltage till date”, explains Sonawane. Since MFCs are capable of utilising a wide range of substrates such as domestic wastewater, farm manure, distillery wastewater, industrial wastewater and landfill leachate, to create electrical energy, they have potential applications in wastewater treatment, pollution remediation and can be used as a remote power source. They are also reliable, clean and efficient. With advances in electrode materials and discovery of more strains of bacterial communities that are capable of generating electrical energy by breaking down organic molecules, the researchers hope that MFCs could soon venture out of laboratories into real-world systems for commercial-scale power generation.

“The continuous and sustained efforts in MFC research all over the globe in the area of material engineering, electrochemistry, microbiology and energy engineering, which could further reinforce the development and exploration of MFCs, could help in applying the technology in real-world applications”, signs off  Sonawane.

Who knew that the waste dumped in landfills could turn to be a pile of gold for power generation!