Floating plastics: Nothing to be buoyant about 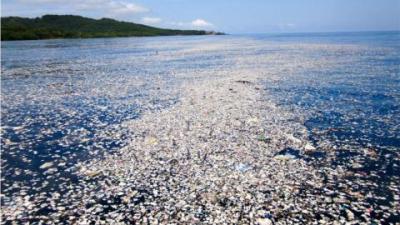 One of the finalist entries of the 2017 Natural History Museum Wild Photographer of the Year contest was Justin Hofman’s Sewage Surfer. The photograph captured a small seahorse, anchored on a pink earbud, drifting in the waters of Sumbara Island in Indonesia. Although the photographed seahorse looked pretty, the image caught the world’s attention for another reason—marine pollution. “ It's a photo that I wish didn't exist,” lamented Hofman, questioning the future ahead of us. It isn’t just the seahorses, whales , dolphins , turtles , fish and even seabirds are bearing the brunt of the plastic we use only once and carelessly discard.

The perils of plastic have consequences beyond marine life, says a new study by researchers at the Indian Institute of Technology Bombay (IIT Bombay) and the National Centre for Polar and Ocean Research (NCPOR), Goa. The study, published in the journal Marine Pollution Bulletin, is the first to show how floating plastic could affect physical processes in the ocean, and thus the climate. The study was partially funded by the Science and Engineering Research Board.

“ Plastics are ubiquitous in water bodies today, and every time we visit a beach, we are welcomed by an enormous amount of beach litter, mainly composed of plastic”, says a concerned Dr Renjith VishnuRadhan, a researcher at IIT Bombay. Dr VishnuRadhan worked on this study with Prof T. I.2 Eldho from IIT Bombay (who led the study), and T. Divya David from NCPOR.  Although there are some efforts to clean up beaches, “the present conditions of beaches around the world present signs of an environmental crisis” he notes.

A simple observation of the colour of the plastic on the beach tells its entire journey. “Most of the beach litter is composed of plastic materials that are in various hues of yellow. This colour indicates that these plastic materials were not thrown directly on the beach, but werecarried by the currents and eventually deposited there”, explains Dr VishnuRadhan. Most then reach the  oceans during high and low tides. It is estimated that plastics make up to 80 % of the ocean debris and in recent years, as many as 700 marine species are affected by marine plastic  pollution.

Studies in the past have shown that trillions of microalgae and other floating organic and inorganic particles, found on the surface of the oceans, reduce the intensity of the solar radiation reaching the water beneath, or stop it altogether. The ocean surface with algae also retains more heat than those regions without the algae. As a result, the surface water heats up while that in  the subsurface cools. This difference in temperatures creates layers of water with different salinity, oxygen and density, preventing the proper mixing of water.

In the current study, the researchers argue that floating plastics in the ocean are akin to marine plankton. “With their abundance, wide geographical distribution range, optically active nature and diversity in size and shape, phytoplankton are comparable to ocean plastics, at least in terms of physical aspects”, explains Prof Eldho. The researchers propose that increasing ocean  plastics can also affect solar radiation reaching the surface, setting off a series of changes in the water column beneath.

The consequences of such changes are far-reaching. “It can affect the normal gas exchange in the air-water interface leading to reduced dissolved oxygen and changes in the winds that blow on the sea surface,” details Dr VishnuRadhan. Besides, as the amount of light and heat penetrated to the ocean depths decrease, photosynthesis and evaporation are affected. “These cascading processes and their feedbacks have to be assessed further with in-situ experiments, field data, and model simulations,” he adds.

While the future looks bleak with an ever increasing use and misuse of plastics, especially those designed for single-use, there is a ray of hope, say the researchers. “Countries have started to  ban single-use plastics and are initiating measures to check plastic pollution. This a very encouraging move,” says Prof Eldho. However, collective efforts of citizens, policy makers and fovernance systems are necessary.

“Regulatory mechanisms only cannot do the trick, but pro-environmental behaviour, together with changes in the consumption pattern, can help in tackling the plastic menace”, he opines. It is difficult to get over the convenience of plastic, but that is the need of the hour. Simple steps like waste segregation, awareness campaigns and citizen-driven monitoring of plastic flow could go a long way in addressing this menace . The study shows how marine plastic pollution not only affects life forms but can also disturb the physical processes governing these ecosystems. "We hope our findings pave the way for further detailed investigations, exploring the potential of plastic pollution to the changes in marine water column physics and the changing climate beyond the pale," signs off Dr Vishnu Radhan.