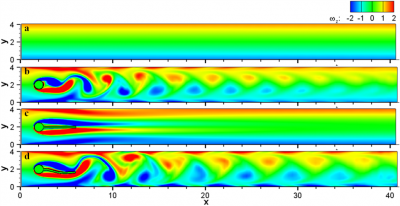 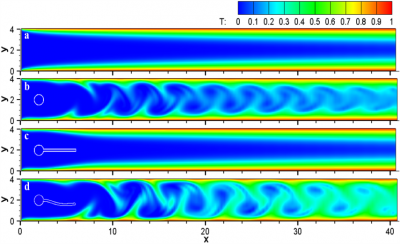 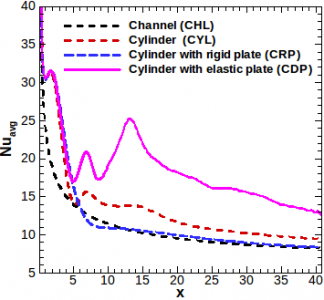 The use of fins to improve heat transfer in engineering systems such as heat-sinks, radiators and IC engines is very common. The present work numerically examines improvements or changes in thermal augmentation, which is possible if a deformable, fin-like structure instead of a rigid one is employed. In biology, employing flexible structures to improve heat transfer is common; for example, elephants thermoregulate their bodies by flapping their large ears, and thermal transport enhancement by oscillating cilia. For such problems, the flow as well as the convective heat transfer is coupled with structural dynamics during large-scale, flow-induced deformation of the structure.In order to quantify the heat transfer enhancement achieved in the case of the flow past rigid cylinder attached with deformable plate in a heated channel (referred as CDP hereafter), we performed simulations for three additional configurations. These cases correspond to a channel flow without bluff body (CHL), channel flow past a rigid cylinder (CYL) and channel flow past a rigid cylinder attached with rigid plate (CRP), with same simulations parameters as those used in CDP. The vorticity contours and isotherms for all configurations at t = 80 are plotted in Fig. 1 and Fig. 2 respectively. We note that the vortices are present in CYL and CDP (b and d, respectively) and strength of the vortices decreases in stream-wise direction. However, the vortices are stronger, closer to the walls and convect much further in the downstream in CDP as compared to those in CYL. The flow is steady in CHL and the rigid plate inhibits flow- instabilities to suppress the vortex shedding in CRP. As illustrated by isotherms in CYL and CDP in b and d, respectively, interaction of vortices with channel wall helps in reducing thermal boundary layer and thereby augmenting heat transfer.In order to quantify the augmentation, we plot stream-wise variation of time-averaged Nusselt number for the above cases (Fig. 3). The results indicate significant increase in Nuavg in CDP due to enhanced convection. The regional thermal improvement, for instance at x ~10.6, implies that large-scale deformation could be leveraged to cool spatially-varying peak thermal loading on a surface, for instance, hotspots on electronic chips.