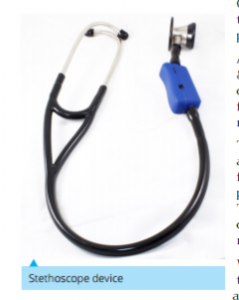 The device can be used in primary healthcare centers to record abnormal sounds, which can be sent to expert physicians for further diagnosis. This can overcome the problem of low ratio of physicians to number of people in India (approximately 1:1700). The auscultated sounds can be included in the medical records of patients. Their repository will enable rapid learning curve for medical students.

We have filed a provisional patent in August 2016 and licensed the technology to Ayu Devices Pvt. Ltd., incubated in mid 2017 at the Society for Innovation and Entrepreneurship (SINE) of IIT Bombay. The company won the Biotechnology Ignition Grant from BIRAC and was recognised as ‘Emerging StartUp’ in October 2017 by Bombay Management Association.