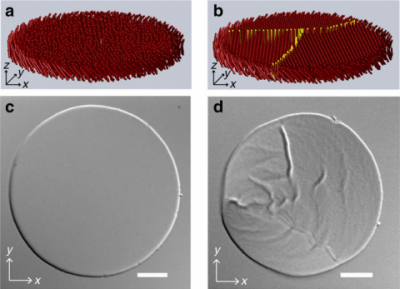 Study shows how crystallisation can be used to shape materials

Thin elastic sheets such as leaves and petals are ubiquitous in nature. As they grow, they do not remain perfectly flat, but instead curl and show various deformities. This is because it requires more energy to stretch the leaf or petal flat, than to bend it. For most materials, such as metal sheets for automobiles, these are undesirable properties. But it turns out that several applications require properties that are the result of such deformed structures. In a study published in the journal Nature Communications, researchers from the Indian Institute of Science (IISc), Indian Institute of Technology Bombay (IITB) and the Raman Research Institute (RRI) have investigated how materials undergo such deformations, and how they can be controlled to manufacture materials with the desired properties.

The researchers took rod shaped viruses that come together by themselves into a monolayer, the technical term for a thin sheet only as thick as a single unit (in this case about 1 micron). Initially, the rods are free to move anywhere within this monolayer, constituting what is known as a ‘colloidal membrane’. Reducing the temperature causes the monolayer to solidify into a crystalline structure. But rather than forming a smooth and flat surface, the monolayer forms a rough, curved surface. This happens when the basic units (virus in this case)  are chiral i.e. the object is distinguishable from its mirror image, like our hand---we can differentiate between which is left and which is right when placed next to a mirror.

“Our work is fundamental in nature and deals with assembly principles involved for making monolayers of aligned nanorods”, says Dr. Prerna Sharma from IISc who led the team that carried out the experimental work. Another team, led by Dr. Anirban Sain from IITB, carried out the theoretical modelling that helped understand and interpret part of the experimental results.

To help understand and interpret the experimental result, Dr. Sain’s research group at IITB carried out a computer simulation of this system.. They created a two-dimensional model of rod like molecules arranged into a layer and let them interact with each other. They found that a uniform arrangement of rods is unstable, and were able to successfully explain what Dr. Sharma’s team found from the experiments. “We can reproduce the specific pattern of the structures that form during solidification of the membrane,” says Dr. Sain.

This research is of scientific interest for the study of the transition of materials from fluid to crystals. In addition, it has potential technological applications in assembling nanorods (extremely small objects of molecular scale that are used in nanotechnology) into layers with desired properties.  “Nanorod array geometry is very popular in devices like solar cells and LEDs (light emitting diodes) and therefore our work has some indirect long-term bearing in these areas,” says Dr. Sharma, adding a cautionary note that there is as yet “no direct impact of our work on solar cells.”