Computer simulation of shocks during re-entry flows in rarefied regions 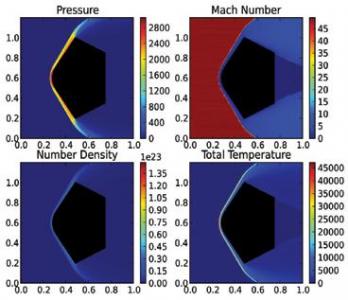 Vehicles that re-enter earth’s atmosphere from space come in at very high speeds that are classified as hypersonic speeds. The speed may well exceed more than ten times the local speed of sound. Such high speed flows generate a shock in front of the re-entry vehicle which affects the heat flux on its surface. The heat flux on the surface of the re-entry vehicle is an extremely important design parameter, and an accurate prediction of this parameter is a critical task. In the lower atmosphere, the flow can be considered to be in the continuum regime and can be handled using regular computational techniques. In the upper atmosphere, the density is low and the flow needs to be handled using techniques that model the surrounding gas as discrete molecules and atoms rather than a continuous media.

For this purpose, in the Computational Gas Dynamics Laboratory, we have developed a Direct Simulation Monte Carlo code to study re-entry flows in the upper atmosphere. Such flows are characterised by non-equilibrium conditions, and one of our present aims is to study not only the non- equilibrium energy distribution but also the rates of various reactions involving nitrogen and oxygen under such conditions. Presently, we have studied these reaction rates using two different existing models and applied it to two different re-entry shapes that have been deployed. However, these rates have been calculated using more phenomenological models. We are presently utilising ab initio methods to obtain the cross-sections of such reactions such that any non- equilibrium situation can be handled.