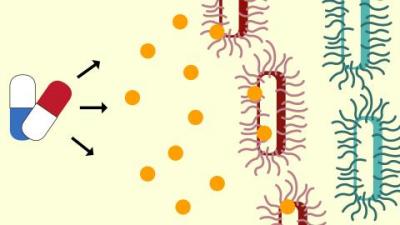 The fact that Mycobacterium tuberculosis, the bacterium that causes the deadly tuberculosis, has developed resistance to most of the antibiotics we have today, is not news anymore. Many bacteria are developing resistance to common antibiotics faster than the number of effective drugs being discovered to fight them. The need of the hour is not just a “new” drug, but possibly a new method of treatment that can fight drug resistant bacteria. Now, a study by Prof. Sarika Mehra  and her team from Indian Institute of Technology Bombay (IIT Bombay) has uncovered a mechanism to increase the efficacy of the commonly used antibiotic rifampicin.

But, how did these bacteria become resistant to the same drug that once killed them? Our irregular and improper use of antibiotics is to be blamed. Due to intermittent exposure to these drugs without completion of an antibiotic course, many bacteria have evolved mechanisms to survive in the presence of these antibiotics. Now, they have turned fatal; multi-drug resistant tuberculosis was responsible for 2,50,000 deaths worldwide and 4,80,00 new cases of tuberculosis in 2015 alone!

In this study, published in the journal Frontiers in Microbiology, the scientists have improved the efficacy of rifampicin by delivering it with another active compound called cumene hydroperoxide (CHP). “The current regime against tuberculosis involves combination therapy of drugs, which works fine in eradicating drug-sensitive Mycobacteria. However, many of the existing drugs are ineffective against the widespread drug-resistant strains of Mycobacterium”, says Prof. Mehra, who headed the study. “A major focus of our research is to find alternate ways of targeting resistant bacteria by use of an adjuvant---a compound that by itself might not have antibiotic properties, but can enhance the efficacy of existing anti-TB drugs”, she adds.

The researchers used cumene hydroperoxide, an oxidizing agent, as it induces ‘oxidative stress’ in the bacterial cell. Oxidative stress is the disruption of the balance between free radicals (atoms with unpaired electrons) and antioxidants that neutralise them. “Under oxidative stress, many free radicals are generated and they can attack the various constituents of the cell such as the DNA.”, explains Prof. Mehra.

To save themselves from oxidative stress, the bacteria destroy these harmful free radicals by converting them to their non-radical form using enzymes. However, if the volume of radicals is much more than what can be neutralized by the cell’s enzymes, the radicals start attacking the components of the bacterial cell itself. The researchers have exploited this mechanism by increasing the production of free radicals using cumene hydroperoxide, which targets the cell membrane, leading the cell to rupture and death.

So, how did the combination of drugs act on the bacteria? In most cases, treating infections with antibiotics, including rifampicin, has one major issue -- the amount of drug that the bacterial cells absorb is very less. More the drug absorbed, better is the efficacy. In this study, the researchers observed that in the presence of cumene hydroperoxide, rifampicin was readily taken in by the cells. Once inside, rifampicin prevents the production of enzymes which neutralize the free radicals. The free radicals thus produced caused oxidative stress in the bacterial cells and resulted in the death of these cells.

Using the drugs in combination enabled using smaller drug dose. This is of significance, since this reduces the risk of side effects. “The effect of radical species on healthy human cells is similar to that on bacterial cells. It may cause damage to DNA and various cell components and increase the risk of diseases such as cancer and Alzhiemer”, explains Prof. Mehra.

In the backdrop of evolving ‘superbugs’, the study definitely holds hope in countering them. “As the data obtained so far is very promising, we will next extend this to Mycobacterium tuberculosis strains in collaboration with a lab used for research on dangerous biological agents and organisms”, says Prof. Mehra on the future direction of this research.