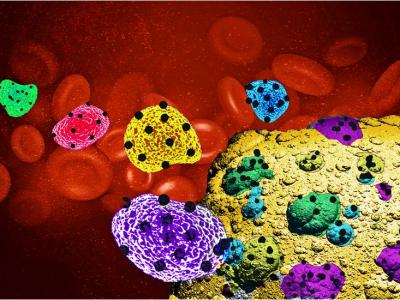 Research finds that cancer cells of different sizes and stiffness are more invasive than a group of
uniform cells.

Cells in our body live and work in harmony with each other to keep it alive. Sometimes, due to
exposure to harmful chemicals or intense radiation, or even during internal duplication, genes
inside few cells can get damaged. At times, the damage makes the cells deviate from their usual
behaviour and go rogue. The rogue cells increase in number and form an unholy band that do not
respect boundaries and suck even the nutrients meant for healthy cells. These cells are what we
call cancer. Gradually and stealthily, they invade new territories and spread to other parts of the
body. At this stage, cancer is generally considered to be untreatable.

Cancer mass is a mixture of cells with properties slightly different from each other. Cells differ
in size and flexibility or stiffness. In some types of cancer, different types of cells assemble and
move together. Researchers from the Indian Institute of Technology Bombay (IIT Bombay) have
found that such a rogue hunting party containing a mixture of different cancer cells is more
invasive than a band of soldier-like uniform cells. Researchers ran computer models that they
had developed and found that typically small and soft cells are most invasive. They also pointed
out that smaller cells that resemble cancer stem cells are most often found at the forefront of
invasion. Their study was published in The Company of Biologists’ Journal of Cell Science. This
research work received funding from the Science and Engineering Research Board (SERB),
Department of Science and Technology, Ministry of Science and Technology, Government of
India.

All the cells in our body are embedded in a matrix made of proteins and other chemicals. As
cancer advances, the cancer cells start invading new tissues. It is not easy for cells to move
through dense sticky matrices. Cancer cells secrete several enzymes to soften the matrix and help
them wade through it.
The researchers chose two types of breast cancer cells that were primed for an invasion.They
analyzed how big each kind of cell is and how strongly each cell binds to its neighbour.
Additionally, they measured how fast the cells move around and how stiff they are. Using
computer simulations, they observed how these cells moved around and invaded new parts of the
body. They controlled the size and stiffness of the cells or their stickiness towards each other.
Also, in the simulations they mixed different types of cells in different proportions. They
calculated the total distance that each cell travelled. They observed how far each cell moved
from its original place, which is termed as the translocation of the cell.

Translocation is a better indicator of invasiveness than the distance each cell travels. Like
football players who can pass around the ball a lot and yet fail to break the defence, cells can also
move around but still fail to invade new territory. The researchers found that translocation as a
whole for a group of cells was maximum in groups that consisted of cells different from each
other in size and stiffness. Interestingly, the groups of cells that consisted of cells differing in
size alone or stiffness alone were not very efficient invaders. They found that a combination of
cells of different sizes and stiffness was the most aggressively invading combination.
The researchers created five different groups of cells. They tested the invasiveness of each group
independently to find whether any specific combination of a particular size or stiffness was the
most invasive. All cells in each group were uniform but had size or stiffness different from cells
in other groups. They found that there was a negligible difference in the invasiveness of each of
the individual groups.

Why is a heterogeneous mixture of cells so efficient at invading? The explanation provided is
very reminiscent of a pretty successful strategy in football called „Total Football‟. The Dutch
football team is known to have practiced it in the 1970s. As opposed to „formations‟, where the
players play in fixed positions, in Total Football, players move around fluidly and replace
another player‟s position, effectively maintaining full pressure of attack on the opponent‟s
defence. What we observe with the cells here is similar to this strategy. “Heterogeneity enables
cells to continuously re-position individual cells within a collectively moving group of cells. This
enhances the net invasiveness of the cell population,” explains Dr Sen, who led the current
research.

The cancer mass contains cancer stem cells that can endlessly increase in numbers, just like
normal stem cells. Experimental studies have pointed out that some of these stem cells are
relatively softer and smaller in size and are found at the leading front. These simulation studies
also found that the same smaller cells were found at the leading front of the invasion. The less
invasive cells of the group follow these more aggressive leader cells and strengthen the attack.
True to the adage that diversity in a team imparts the ability to solve a complex problem, a mixed
bag of cells with different sizes and stiffness is the most efficient combination for cancer cells to
invade. In this heterogeneous group, the cells are interacting with each other during the invasion.
One day we may be able to exploit this interaction to kill the cancer cells. We may evolve a
strategy to interfere with this crosstalk and hinder their invasion. Perhaps we may then be able to
outwit cancer even at this final invasion stage.