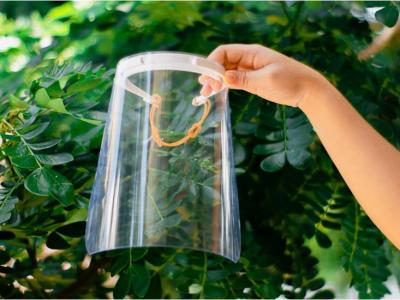 Researchers improve the efficiency of face shields by coating them with a hydrophobic layer.

Face shields act as primary barriers to airborne disease-carrying droplets. They are effective in closed spaces such as aircraft cabins and offices where chances of exposure to the droplets from speech, breath, cough or sneeze are high. Face shields have assumed importance during the COVID-19 pandemic, and simple face shields made from plexiglass plastic or polyethylene terephthalate (PET) are available for public use.

Plastic is hydrophilic; tiny water droplets tend to stick to its surface. Studies have shown that the SARS-CoV-2 laden respiratory droplets can survive on different surfaces for a few hours to a few days. When individuals unwittingly touch such surfaces, they are susceptible to infection by fomite transmission. The hydrophilic nature of the face shield increases the chances of fomite transmission, which calls for frequent cleaning and sanitising them.

A team of researchers from the Department of Mechanical engineering from the Indian Institute of Technology Bombay (IIT Bombay), Mumbai, have proposed a novel technique to enhance the efficiency of face shields by coating them with a hydrophobic (water repellent) layer. The resulting composite face shield acts as a barrier for airborne droplets and repels them; this reduces the risk of fomite formation from the surface of the face shield. They published the results of their experiments in the journal Physics of Fluids. The project was funded by the Industrial Research and Consultancy Centre (IRCC), IIT Bombay.

Expelled droplets are tiny – about 50 -200 microns in size (a micron is one-thousandth of a millimetre), and hence, unseen to the naked eye. The team wanted to make protective gear better to help arrest the spread of COVID-19. So, they first targetted to improve the efficiency of face shields.

When a water droplet falls on a surface, the impacting droplet’s energy (kinetic energy) and surface tension (resistive forces) tend to flatten the droplet on the surface before it rebounds. If the surface has a high affinity to attract water (high wettability), such as the PET surface of face shields, the droplet spreads out and sticks to the surface. When the surface is inclined (as when a wearer puts on a face shield), gravity acts on the spreading droplet, making it trickle down. The ‘runny’ droplet impacts the visibility of the face shield and increases the chances of fomite formation.

The researchers came up with the novel idea to coat the face shields with a hydrophobic substance to prevent the droplets from sticking on the surface. They repurposed a commercially available and economical spray used to coat automobile windshields. The spray coating contains silica nanoparticles making the coating superhydrophobic thereby keeping the windscreen clear during bad weather conditions. The researchers coated the face shield with this hydrophobic coating and demonstrated that the face shield could fend off tiny virus-laden droplets. They observed that water droplets falling on the face shield bounced off the surface, keeping the coated area free of water deposit and hence eliminating fomite accumulation.

The team conducted laboratory experiments to establish the repelling properties of the composite coated face shield. Another novel feature of the study is the assessment method of the droplet’s interaction at the face shield surface.

Existing assessment methods utilise laser techniques to visualise the interaction of aerosols on surfaces. This method gives the overall picture of the interaction. “However, in our study, we show how individual droplets behave after coming into contact with the face shield’s coated surface,” says Prof Rajneesh Bhardwaj, co-author of the study. Their experiments also show that the coating does not affect the transparency of the face shield.

The researchers assessed both uncoated and coated face shields’ wettability, surface roughness, and optical transmission properties. They evaluated and characterised the coating with deionised water (demineralised, purified water) droplets. A high speed, high-resolution camera coupled to software and analytical tools indicated how the droplet interacted at the surface.

Asked how deionised water could substitute for an actual respiratory droplet, Prof Amit Agrawal, co-author of the study, says: “Existing literature has shown that as the respiratory droplets are tiny, the amounts of saliva and salts in them are minute and not usually significant. Hence deionised water is a fair substitute in composition and properties for an actual respiratory droplet.” The researchers used what is called Weber and Reynolds numbers to define and analysed the impact dynamics of the falling droplet. The overall characteristics encompass droplet size, kinetic energy, velocity, viscosity, surface tension, and other physical properties. The team compared the evaluation for both uncoated and coated surfaces for different droplet velocities.

When assessed, the coated surface had far less wettability than the uncoated surface. The coating aided the droplet’s kinetic rebound, achieving the desired effect of repelling the droplets from the surface. The study posits that the droplet bounces off from the face shield’s surface in about 12 milliseconds, taking a parabolic trajectory as it falls. Further, the bigger the droplets, the faster the rebound, even breaking into multiple droplets.

The team also evaluated the performance of the coated face shields for droplet velocities varying from 0.1 m/sec to 1 m/sec, which covers rainy situations where droplets fall at higher speeds on the surface. “Even under rainy conditions, the coating repels the droplets, and the visibility of the face shield is not affected,” say the authors highlighting the additional advantage of the improved face shield.