With Air Conditioners, Energy Efficiency Is The Star! 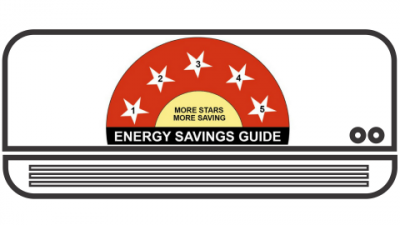 Energy efficient devices contribute significantly towards a greener environment and help tackle climate change. In 2006, the Government of India initiated the program of ‘star labels’ on appliances that provide information regarding their energy efficiency. Initially voluntary and covering few appliances, star label is now mandatory in India for few appliances like the room air conditioners and frost-free refrigerators. While regulations and innovation are crucial to design such devices, consumer choice also plays a significant role. How influential are the rating labels in driving customer choices? To answer this, researchers from the Indian Institute of Technology Bombay (IIT Bombay) have conducted a study and found out that on an average, consumers prefer air conditioners that have labels, and are willing to pay more for those that are energy efficient.

As per a report from the Ministry of Statistics and Program Implementation, households in India consume about 22% of electricity. Air conditioners, one of the most energy-intensive appliances, is increasingly becoming common and could impact electricity consumption in a big way. Investing in an energy efficient air conditioner can reduce the demand for electricity and be pocket-friendly too. It is believed that informing customers about how much energy a device consumes could push them to towards choosing energy efficient ones. Star labels, ranging from one star (least energy efficient) to five stars (most energy efficient), help customers compare different products and make an informed choice.

In this study, researchers from the Centre for Technology Alternatives for Rural Areas and Interdisciplinary Program in Climate Studies, IIT Bombay, led by Prof. Anand B Rao, used statistical tools to analyse what consumers preferred while choosing a 1.5-ton split air conditioner. The researchers analysed 1184 observations from 148 individuals, as each respondent gave 8 different preferences in hypothetical purchase situations. They estimated consumer preference for different attributes of ACs such as brand, air filter, noise level and star rating.

The study also found that 70% of the people surveyed were aware of star labels and 48% believed that higher star rated devices consume lesser electricity. Though customer preference varied with star rating levels, it was seen that 69% preferred an air conditioner rated 3-star over one with a 2-star rating, and 78% preferred a 5-star rated air conditioner over a 2-star rated one. In addition, 85% of the respondents preferred the presence of a star label on the ACs.

Using statistical models, the study found that customers were willing to pay up to ₹12,500 more for air conditioners with star labels -- an amount significantly higher than what they would pay for the presence of a brand name (₹9,000). In addition, 62% of the consumers were willing to pay for the increment in star rating level from 3 to 5. The study concluded that such investment would be economically beneficial if the household monthly consumption of electricity is greater than 100 kWh, as the savings would be greater than the estimated cost incurred for more efficiency.

“This study provides empirical support for the standards and labelling program on air conditioners.  In India, the impact of the labelling program on consumer choices has been understood only qualitatively. This study provides quantitative estimates of the impact on the program on consumer choices”, says Dr Manisha Jain, an author of the study, talking about how the results could be used to design programs that drive energy efficiency.

The study demonstrates that the consumer information programs as mandated by the regulations have been bearing fruits through a wider recognition among the Indian consumers. “This shows that due to the standards and labelling program, the adoption of energy efficient ACs is market-driven and may not require any further government intervention apart from strengthening the standards”, say the authors. Extending this study further, the researchers plan to explore the relationship of rating preferences with household income, education, and other attributes to help design targeted programs for increasing energy efficiency.