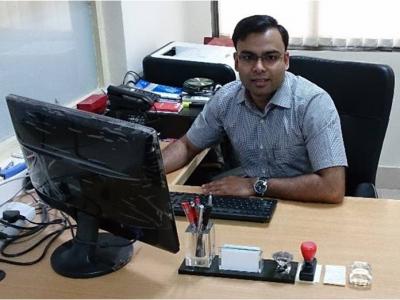 The Department of Science and Technology, Govt. of India, instituted the Swarnajayanti Fellowship scheme to commemorate India‟s fiftieth year of Independence. Each year, some eminent young scientists are awarded the fellowship for notable and outstanding research in applied or fundamental fields of biology, chemistry, environmental science, engineering, mathematics, medicine and physics.

Prof Amartya Mukhopadhyay from the Department of Metallurgical Engineering and Materials Science, Indian Institute of Technology Bombay (IIT Bombay), Mumbai, has received the prestigious fellowship for the year 2021, for his contribution to the field of Engineering Science. The Swarnajayanti fellowship comes with Rs. 25,000/- monthly stipend along with a research grant for five years. He is also the recipient of several other awards and recognitions, notably, recognised by the Royal Society of Chemistry (United Kingdom) journals as one of the „2019 Emerging Investigators‟ and conferred with the Young Engineer Award from the Indian National Academy of Engineering (INAE). Also, he has co-authored a textbook - Interdisciplinary Engineering Sciences: Concepts and Applications to Materials Science.

Prof Mukhopadhyay heads the High Temperature and Energy Materials Laboratory at IIT Bombay. He has been instrumental in the pioneering research in finding new reactive alloys for designing anodes for Lithium-ion and Sodium-ion batteries. “We aim to build better, robust, long-lasting rechargeable batteries for advanced applications, such as batteries for electric vehicles and for storage of energy harvested from renewable sources,” he says.

Under Mission Innovation India, the country is on the path to minimise the usage of fossil fuels for electricity generation and encourage environment-friendly electric vehicles that run on these advanced batteries. Prof Mukhopadhyay says, to achieve realistic solutions in these directions there are several design challenges that need to be overcome with these batteries. These advanced applications of batteries necessitate improvements in various factors: the energy stored per unit mass/volume (the energy density); fast uptake/delivery of the stored energy (power density), especially for electric vehicles; enhancing the longevity of the battery without degradation during the operation cycles; and safety aspects.

Prof Mukhopadhyay‟s group is actively researching novel solutions, one of them being focusing on designing new alloy materials that will reduce lithium-plating and „dendrite‟ formation in the lithium-ion battery systems, thus improving the battery‟s safety aspects. In addition, they endeavour to improve the battery‟s energy storage capacity, the possibility of rapidly charging the battery (in a few minutes) and battery longevity.

Lithium-ion batteries consist of two electrodes separated by a membrane suspended in a liquid electrolyte. The cathode is typically made of lithium transition metal oxide based compounds and generates lithium ions from its lattice (crystal structure). The anode material is graphitic carbon, which can also store the ions in its lattice. The structure and chemical nature of the anode materials are such that the incoming lithium ions get lodged and dislodged in the lattice spaces (a process called intercalation) during the charging-discharging cycles. Positive and negative current-carrying terminals connect to the electrodes from which current is drawn.

During the charging cycle, the cathode generates lithium ions which permeate through the separator membrane and get lodged in the lattice of the anode. The electrons run through the external circuit and build up the battery charge. In the discharge cycle, the reverse happens, and the lithium ions travel back to the cathode to combine chemically.

The current lithium ion battery systems have some inherent drawbacks, such as short lifespan of the battery (due to degradation of the cell components), slow charging/discharging rates, possible short circuiting of the cell (causing operational and safety hazards) and usage of inflammable and hazardous chemicals. The problems faced with the current battery systems lie in the materials used and their operational conditions, says Prof Mukhopadhyay. “Rapid charging-discharging cycles can make the materials structurally unstable, especially, if we try to draw more lithium out of the cathode lattice and push more lithium into the anode lattice. It also exacerbates mechanical stresses in the confined space of the battery. These factors degrade the battery quickly in each charge-discharge cycle,” he adds.

Another drawback of these batteries is that the lithium ions often tend to plate the graphitic carbon electrode at the anode side, especially at fast charging rates. As a result, the deposits form spikey structures called dendrites. Over time, the dendrites grow and their pointed tips can reach up to the separator, pierce through it, potentially leading to short-circuiting of the battery internally.

Prof Mukhopadhyay says, so far, since lithium-ion batteries were developed, most of the improvements have happened on the cathode side, with practically little or nothing on the anode. However, they address the challenges at the anode. “We are designing and developing special alloys that can significantly enhance the energy storage capacity, allow much faster uptake/delivery of charges and also prevent/minimise lithium-dendrite formations. These will also allow widespread successful development of the upcoming sodium ion battery systems,” he adds.

The professor informs that their current research on lithium and sodium ion batteries is at the TRL 4 (Technology Readiness Level) stage. This means they have designed lab-scale working prototypes to test their research outcomes. The fellowship will enable him to scale-up the research to the next level: build an industry model. His Institution and Department work closely with industries, balancing the academic and experimental aspects of engineering sciences.