Forget The Kitchen; Your Next Meal May Be Cooking In A Window Powered By The Sun! 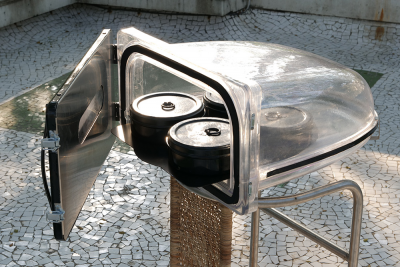 The use of solar power for household energy needs is gaining traction. Solar options are available for lighting, heating water and cooking too. However, for the many living in India’s cities, using solar power is often not an option due to space constraints. Apartments, where most live, do not provide an open terrace or area where solar panels could be installed. Now, award-winning design of a solar cooker from Indian Institute of Technology Bombay, may solve this predicament.

While solar cookers have been in the market for a while, what’s new about this innovation is the fact that it does not need a large open terrace or garden to be installed! A small window would work. Besides, it does not require you to continuously monitor the cooking process and change the cooker’s directions to suit the time of the day, while drastically cutting down cooking time.

Designed by Mr. Avinash Prabhune, a student of the Industrial Design Centre, IIT Bombay and guided by Prof. B K Chakravarthy, the solar cooker is as convenient as a microwave oven. It can be mounted on any south-facing window, for quick cooking. The cooker reaches a temperature of 120oC in just 20 minutes.

This innovation was awarded the Gandhian Young Technological Innovation (GYTI) Award 2018, by the Hon’ble President Shri Ram Nath Kovind at an event held at Rashtrapati Bhavan on 19th March 2018.