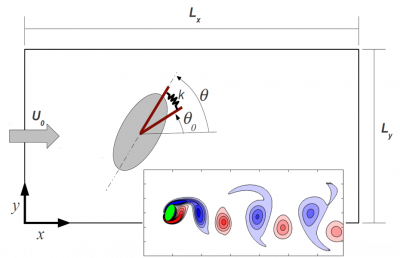 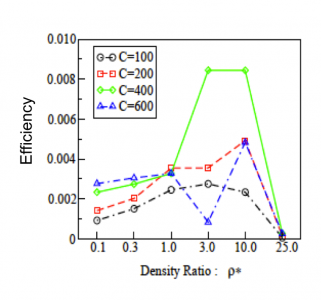 Any elastic structure vibrates in the presence of fluid flow; for instance, we can see leaves in a tree, attached to branches via elastic stems, oscillate furiously on a windy day. These vibrations often occur due to vortices, which are essentially regions of intense fluid rotation. Vortices are periodically shed behind any solid body placed in a fluid flow, and they tend to ‘kick’ the solid as they are shed. The solid, being elastic, comes back to its original position after being displaced by the vortex, until it is again perturbed by the next vortex; this periodic process is known as ‘Vortex Induced Vibration’ (VIV) of the solid. Solids undergoing VIV may be used to extract energy from the flow, and many such energy extracting devices have been designed and studied by research groups around the world. Almost all the studies in the past have however focused on structures that are attached to a mono-stable spring (i.e., the spring has only one equilibrium position). Our research group is studying such devices using numerical simulations of fluid-structure interactions, and we are specifically focusing on elastic structures that are bi-stable.One such setup that was recently studied by us involved fluid flow incident on an elliptic plate that is allowed to pivot on its axis, and is attached to
a torsional spring (Fig.1). This setup was partly inspired by the Australian Aboriginal musical instrument called ‘bullroarer’, which consists of a wooden plate attached to a string (which acts like a torsional spring). Whirling the plate at the end of the string leads to a really loud sound, due to angular oscillation of the plate. We therefore asked the question: can such a device be used to extract wind energy efficiently? We first found that the torsional spring can induce bi-stability in the orientation of the plate, so that there were two orientations at which the plate was at equilibrium. If the spring constant is adjusted correctly, it is possible to get significant vortex shedding, which can in turn lead to higher energy extraction efficiency. In our simulations, we modeled energy extraction via an additional viscous damping on the ellipse, with coefficient C. It was found that the efficiency tends to increase for higher solid-to-fluid mass ratios (Fig. 2) due to auto rotation effects, and that the solid can ‘lock-in’ into multiple frequencies due to the bi-stability. Most importantly, it appears that bi-stable VIV-based energy harvesters can be used to extract energy over a wider range of wind velocities compare to their counterparts that use mono-stable springs. Such systems can therefore be used for small scale wind energy harvesting, where the wind velocity can vary over a large range.