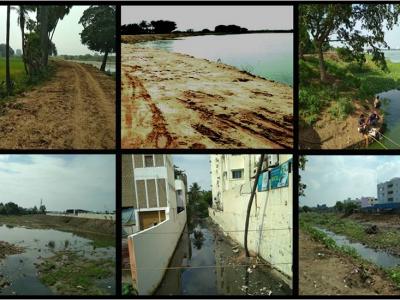 The city of Madurai in Tamilnadu lies mostly in the semi-arid zone, has scanty water resources and receives erratic rainfall. Historically, a network of natural storage tanks called the Vandiyur tank cascade system (VTCS) had been meeting the water demands of Madurai adequately.

However, the city is progressively facing an acute water shortage and frequent droughts in recent times due to rapid changes in land-use activities, impacting the tank storage capacities. A tributary of the river Vaigai flows across Madurai from the North to the South. The city‟s geography has natural elevations and depressions along the line of flow of the rivulet. As a result, the water flows naturally into the adjoining low-lying areas before entering the Vaigai river.

Taking advantage of this landscape, the past rulers in the 1600s built eight large tanks in the water collection regions along the tributary line. They were positioned from a high-to-low gradient. Thus the natural flow of water fed the tanks sequentially, due to a cascading effect, before the rivulet joined the Vaigai river. This chain of tanks is known as the Vandiyur Tank Cascade System.

Researchers from the Indian Institute of Technology Bombay, Mumbai, conducted an extensive survey of the Vandiyur Tank Cascade System and published their findings in SN Applied Sciences. The authors posit that once held for its historical and ancient importance, the Vandiyur tank system is suffocating due to negligence, lack of scientific knowledge, and inadequate policy to govern its maintenance. Further, this traditional water storage system is fast succumbing to the rapid urbanisation of the city.

“The uniqueness of this water system is that, unlike conventional tanks that are filled by channelling water from a flowing river, the VTCS tanks are embedded in the line of river flow. Moreover, they are interconnected. So unless a tank is filled, the river does not progress further downstream, “ says Dr Pennan Chinnasamy from the Centre for Technology Alternatives for Rural Areas (CTARA), who leads the research group for this study.

In addition, the tanks doubled up as catchment areas. As a result, they adequately fed the groundwater aquifers and wells, meeting the people‟s varying water requirements.

The researchers conducted a water-balance approach study to check the tank system‟s present condition. They assessed parameters including how much water was flowing into the tank from the river and rainfall, the tank volume, and the region‟s water demands. They also factored the parameter changes over a two-decade period due to anthropogenic activities and urbanisation measures. The team used both extensive field analysis and Google Earth‟s remote sensing database of maps for their assessment.

The authors, along with local stakeholders such as the Development of Humane Action (DHAN) Foundation, an NGO, state that presently, the VTCS is in a bad state and is in dire need of proper management and repair. Further, the above mentioned external parameters severely affect the storage capacity of the tanks, thereby impacting the area‟s „water budget‟ or the available water for utilisation.

In the early times, the land was treated as a single entity without bifurcations into rural or urban areas. Although there was no defined watershed system, the kings managed the traditionally designed tanks well so that the water was contained in the city and met their requirements.

However, in recent times, more so after the land use land cover (LULC) policies developed, the land was demarcated as rural, semi-rural, and urban regions. Accordingly, the tanks come under the management of different agencies, which make independent decisions based on their defined regional requirements. In addition, the tanks in the system are viewed as individual entities rather than a single combined hydrological unit. Therefore, managing the interconnected tanks individually will lead to the entire system being affected.

“Due to paucity in scientific understanding on traditional tank existence/operations and linkages with policy, there has been lack of ownership leading to negligible tank management activities,” says Dr Chinnasamy.

Moreover, activities like land conversion and construction activities and extreme agricultural practices have increased soil erosion, which settles as silt in the tanks. This severely jeopardises their water storage capacity. With inadequate management and no up-gradation of the tanks, the city faces a rapid water imbalance, avers Dr Chinnasamy.

The researchers then estimated the water budgeting parameters. Water budgeting is analogous to accounting, where we tally the water input and output. Groundwater levels are retained when the groundwater recharge (supply) and groundwater use (demand) is balanced. It can be achieved by minimising water losses due to runoff, evaporation, transpiration (from plants such as excessive water-hyacinth growth) and other surface losses such as water theft. Adding a storage component improves the groundwater recharge levels dramatically.

The researchers analysed the parameter variations over 20 years. They found a 300% increase in urbanisation leading to 40% of the catchment water lost due to runoff. Reduced agriculture further diminished the chances of slowing down the runoff or recharging the groundwater. Also,when they assessed rainfall variations, although there was negligible change in the average rainfall (931mm), runoff increased due to ill-maintained tanks during the flood periods.

“Tank cascade systems can mitigate and act as a buffer for climate extremes, especially by storing floodwaters for future droughts,” says Dr Chinnasamy. However, the tank revival project is a challenging task with the present policies, he adds.

Suggesting a few immediate remedial measures, the authors say that silt removal, clearing water hyacinth in the tanks, and fortifying the tank embankments could help revive the system. The DHAN Foundation is spearheading the revival works under public-private partnerships and are active partners with CTARA.

In addition, Dr Chinnasamy emphasises that “ Primarily, the tanks in the cascade system need to be managed holistically as a single integrated unit for better management and tank efficiency.” He says policy changes are the need of the hour. Solving an issue at a single tank will not remedy the system but only lead to it percolating down the chain as the tanks are interconnected.